It’s one of the most important questions to ask yourself when considering a new computer: what are you going to use it for?

In the previous article, “The Journey to My New Computer: Taking Stock“, I reviewed the computers I use each day and talked about why I’m about to replace three of them. Today, we’ll cover a more important topic: just how I use, and what I do on, those computers.

As I said before, while the specifics will likely not apply to you, the process of evaluating how I use my technology is something you might want to go through yourself someday.

80% of my computer’s time is boring

By “boring”, I mean the computer is mostly twiddling its electronic thumbs because it’s not being asked to do anything strenuous.

Eighty percent of my time is spent in a web browser. I’m writing articles, reading and responding to emails, processing Ask Leo! comments and questions, keeping an eye on social media, and so on.

Particularly since I don’t run a PC-based email program, relying instead on the Gmail web interface for all my email, my web browser really does take up most of my day.

I actually use two. The majority of my time is spent in Google Chrome, and I also run FireFox. I have two accounts on many services: personal and business. While some, like Gmail, allow you to log in to different accounts in the same browser, many do not. I’ve found it’s easier to fire up a completely separate browser for that second set of accounts.

So running a web browser or two is my most basic need. Almost any computer will do that.

Let’s look, instead, at the tasks I perform the rest of the time that place actual demands on my computer.

I stopped typing a moment ago to grab a screen shot, which represents an additional class of work I do with my computer: pictures.

I make heavy use of Snagit to capture and edit screen shots. Almost every image you see on Ask Leo! of something that appeared on a Mac or PC computer screen was captured and edited using Snagit.

I’m also a big user of Adobe Photoshop CC for my hobby photography as well as Ask Leo! images.

Of the two, Photoshop is definitely the heavier-weight program. While SnagIt will run on just about anything, Photoshop has more impact on the requirements of my computer: I’ll need to make sure there’s enough RAM and CPU power, as well as putting some thought into the display I’ll be using when editing images.

I mentioned in the previous article that I purchased my current desktop computer — a 12-core Mac Pro — for its ability to edit video. Specifically, I anticipated using Final Cut Pro (available only on Mac) which would make use of all 12 cores to edit videos smoothly and do the final render into a video file more quickly.

I rarely use Final Cut these days. Instead, I use Camtasia, screen recording software from the same company that makes Snagit. Like Snagit, there are two components: the actual capture software, which records what I do on the screen as I do it, and the editing software I use to create the final video. What’s interesting, to me at least, is that the video editing software is simpler to use than higher-end products like Final Cut (or Adobe Premiere, which I also have access to), yet flexible enough to meet all my editing needs for both screen recording and traditional video taken with my camera.

Video editing probably puts the most stress on my computer in terms of processor and disk utilization. This is the application I use — regardless of which specific program — that benefits the most from a powerful CPU, a fast disk, and lots of RAM.

As I mentioned previously, I’m currently running a Mac Pro, yet I write about Microsoft Windows extensively. That means I need to be able to run Windows, and not just Windows 10; I need Windows 8, and 7, and even Windows Vista and XP available to me as well.

Rather than having five additional machines in my office, I use virtual machine technology to run Windows as an application within the MacOS operating system. That way, I can run any copy of Windows I’ve set up with a simple click or two.

I use two different software packages for virtualization: Parallels and VirtualBox. Parallels is Mac-only, and for some time performed better than VirtualBox. VirtualBox, on the other hand, is free, and seems to work equally as well on both PCs and Macs.

By running a virtual machine, I’m asking the computer to run (at least) two operating systems at the same time. This has the most impact on memory requirements. While a virtual machine can be configured to use less than the total amount of RAM in the computer, it still needs enough to run well. The bottom line here is that more RAM — lots more RAM — is definitely better.

I admit it. I play World of Warcraft (WoW) from time to time. After being introduced to MMPORGs (Massively Multi-Player Online Role-playing Games) some years ago, I found it a convenient and enjoyable way to burn off stress and take my mind away from the day-to-day for a little while.

WoW can certainly benefit from RAM and CPU, but it’s the video card and display that probably make the most difference in its performance. Needless to say, it’s not a priority in the bigger picture, but being able to run WoW well would be nice. The good news here is that WoW is not currently leading-edge technology, so most options should play it well.

As I look at my Mac’s dock (more or less akin to the Windows taskbar) and see all the programs I have pinned for frequent use, I realize I do a lot more than just what I’ve listed above.

Entries include: command line and remote access interfaces, text editors, instant messaging applications like Skype, WhatsApp and others, Evernote, VLC, Audacity, Microsoft Office, and more. In the background, I have two instances of Google Drive (on personal, one business), OneDrive, Dropbox, and BoxCryptor all running at the same time. On top of that are the various custom scripts I run from time to time, as well as my backup solutions.

The good news is, as long as whatever computer I get is able to handle the major tasks and applications I’ve listed above, these programs will all operate just fine with no additional consideration. It’s the “big apps”, or rather the “big tasks”, that really drive what hardware to select.

That’ll be the next in this series: knowing what I need this new machine to do, it’s time to make some specific decisions and place an order. 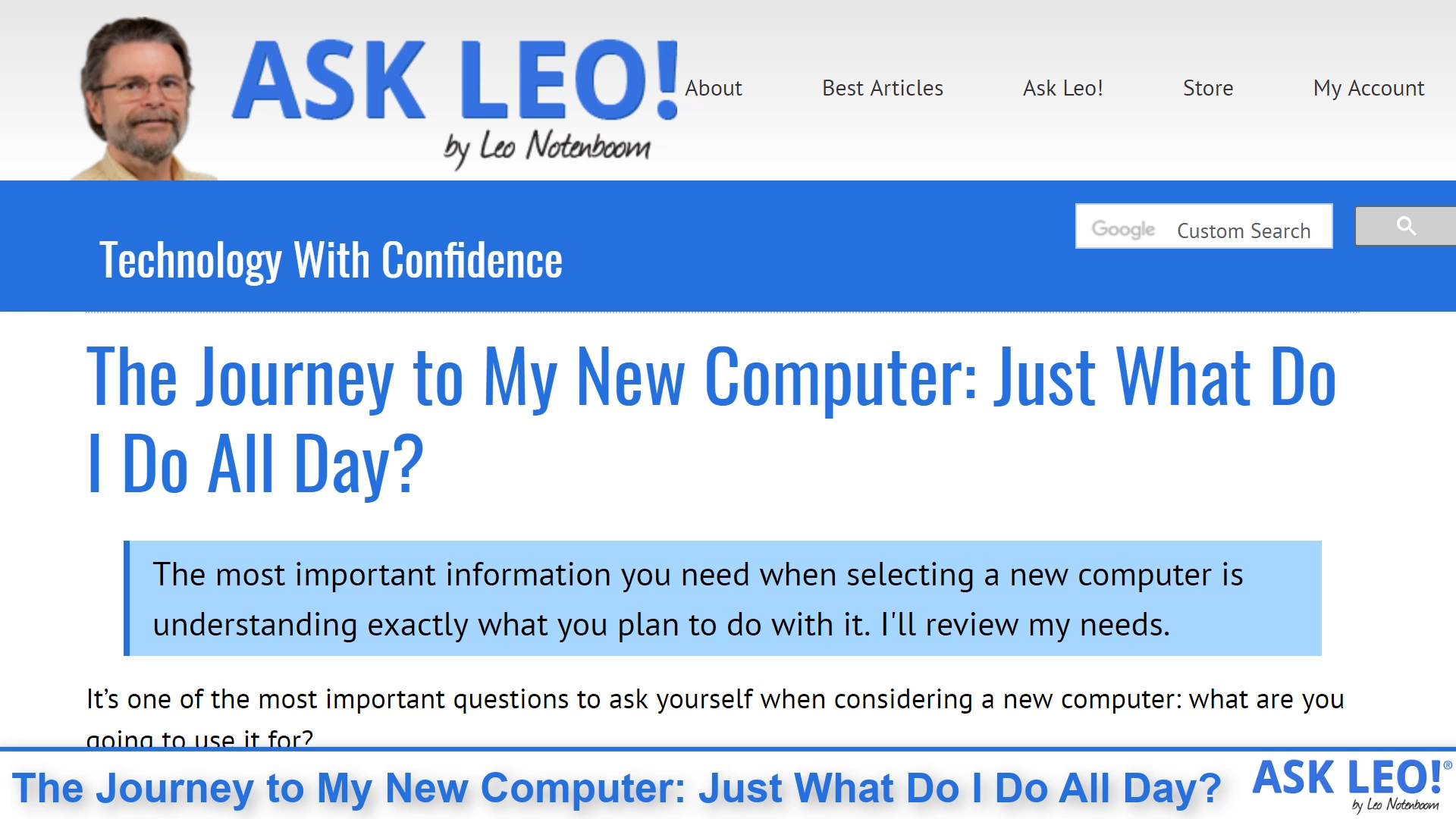 8 comments on “The Journey to My New Computer: Just What Do I Do All Day?”