If you’re not skilled at this, you’re going to fall behind.

The most important life skill, for everything from getting your computer fixed to becoming a highly-paid professional, may not be what you think it is.

I’m often asked what it takes to become a computer programmer.

My business is to answer questions about computers in general — everything from broken hardware to lost passwords.

The answer to the first, and the chances of getting answers to the rest, have one important thing in common — something most people don’t even consider. And I’m willing to bet it’s not what you think.

I’ll give you one hint: today’s topic is off-topic since it has nothing to do with computers or technology.

And yet, it has everything to do with it.

The most important skill in technology — or any field — is your ability to communicate: clearly, completely, and perhaps persuasively. Poor communication skills run rampant and are a major reason many questions go unanswered. Good communication skills are a doorway to better interactions with just about anyone: a potential boss, the person asking you to write software, and the person of whom you’ve asked a question, to name just a few.

It’s all about your ability to communicate

The #1 reason an Ask Leo! question goes unanswered is that it doesn’t include enough information.

I can’t understand the question.

You might be tempted to say this is because a high percentage of my readers aren’t native English speakers, and that does play a part, but not as large a part as you might think.

No, when it comes to writing unintelligible questions, it’s the so-called “native English speakers” that cause me the most frustration.

After all, folks from non-English-speaking countries have a bit of an excuse, while so-called native English speakers do not.

The risks of writing about writing

Obviously, this is a topic I’ve come to have fairly strong opinions on…

… but I always hesitate to write about writing.

It brings out the nitpickers — the people who like to point out the hypocrisy of writing about how important it is to write proper English while committing grammatical or spelling errors when doing so.

In reality, it’s a good thing, when done respectfully.

Today, I am a much better writer than I was when all this started, in part because of the people who pointed out my errors along the way1. A few of those folks have become valued Ask Leo! regulars.

That’s not to say I’m perfect, or that their job is done. I fully expect there to be errors in this essay as well.

And I fully expect someone will point them out.

I’m also not talking about so-called “text speak” or similar shorthands. While they do contribute to the problem, they’re certainly not the worst offenders.

What I object to are the questions that are written in English, but the English is so poorly written that it ranges anywhere from unclear to completely incomprehensible.

It happens more often than you’d expect, and it comes from all demographics: young and old, male and female, and just about any English-speaking locale.

Why it matters: getting your computer fixed

It seems pretty obvious: if I can’t understand a question, I can’t help. If it looks hopeless, I simply skip the question and move on.

But I often do try, and that’s where it can get more frustrating. I do try to answer poorly written questions, guessing or inferring what the problem is from the perplexing use of English.

I’ve gotten better at it, but sometimes I get it wrong. I answer a question, but it’s not the question being asked. Or I ask for clarification, and the clarification is just as bad as the original question.

I’ve just wasted my time and the time of whoever was trying to get their problem solved.

All for lack of being able to communicate clearly in English.

It’s not just me. Computers are notorious for requiring clear and accurate descriptions of problems in order to get to the correct resolution. Whether it’s some random person like me on the internet answering questions, a hometown technician, or a company’s support representative, if they can’t understand you, they can’t help you.

All for lack of being able to communicate clearly in English.

Why it matters: that high-paying job

It’d be easy to write off my little rant as that of a frustrated computer geek who’s gone over the edge after reading one too many questions.

If you do, you’ll be missing my point2.

The ability to write clear and proper English is about much more than the ability to express a tech problem in language that can be understood.

As an old commercial for a vocabulary improvement product used to claim, “People judge you by the words you use.”

It may or may not be fair, but it is absolutely true.

The same is true about your ability to write well.

Be it questions, letters to the editor, job applications, or anything else, something written that sounds like it came from a barely-literate teenager is likely to be treated as if that’s exactly who wrote it.

It doesn’t matter how smart you really are; your written and spoken language skills convey an impression of who you are. And even if the impression is wrong, it sticks.  It can be nearly impossible to overcome.

You’re not going to get that corner office if you speak and write like someone who never finished high school.

Why it matters: the computer programmer

[a._twitter p=”1″]I’m often asked the most important language to learn when becoming a computer programmer. Nowadays, my response is “English.”[/al_tweet]

That’s not what most people expect.

Even a job dealing primarily with computers still deals extensively with the people who use them. Be it the designers, the users, the repair people, or the other programmers or managers on the team, success is about communication, and it’s all an opportunity for you to present yourself as a literate professional.

Or as something else.

And that is true for any job.

People judge you by the words you use and how you use them.

It may not be fair, but it is true. You can object. You can insist that it shouldn’t matter — but it does.

If I had to do it all over again, I’d have taken more English classes.

Naturally, I believe people living in English-speaking countries should be well versed in English, and hopefully, that makes sense. However, there’s another characteristic of our planet that is easy to overlook, might also be considered unfair, and yet remains important.

A large amount of the internet is in English.

Even if you live in a non-English speaking country, the ability to read and write English opens doors to immense amounts of information and assistance that would otherwise remain inaccessible.

Fair or not, it is what it is, and most of it is in English.

ESL: English as a second language

I have a soft spot for non-native speakers who learn English and learn it well.

You see, English is — technically — my second language. Even though we were living in Canada at the time, I spoke only Dutch until I was about four.

In helping overseas relatives and others with their English, it’s become very clear to me that English is an incredibly difficult language to learn. Just about the time you learn a “rule,” you find that there are exceptions, and then exceptions to the exceptions.

The worst question an ESL instructor faces, I’m sure, must be “Why?”

The only answer I can come up with is “Because it’s English, and that’s just the way it is.”

Once again, it’s not fair and it’s not easy.

And I mean speaking and writing it well. “Enough to get by” isn’t really enough. As unfair as it is that people judge you by your use of English, it requires a lot more skill than just “getting by.” 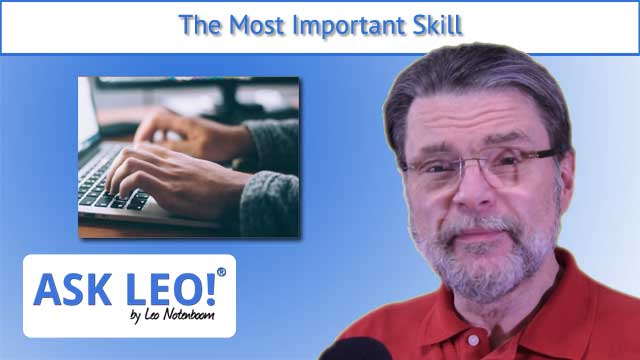 1: And in large part to having an awesome editor.

185 comments on “The Most Important Skill”