Time for my most common yet most annoying answer ever.

I’ll describe what the Visual C++ redistributables are all about, and why the safest thing to do is nothing.

C++ is one of several languages programmers use to create software.

Visual C++ is Microsoft’s implementation of that programming language. This includes the tools to convert (or “compile”) the code that programmers write in C++ into the “.exe”, “.dll”, and other files understood by Windows.

Programmers who write software in Microsoft Visual C++ make use of what are called “standard libraries”. These are collections of pre-written software allowing them to avoid rewriting common sequences of code. Instead, they use this collection of pre-written and thoroughly tested software.

Much like the .NET Framework, you can end up with more than one version on your machine.

This is not uncommon.

Do you need them?

Leaving them all in place is by far the safest thing to do.

Is it worth it?

Is it worth the time and risk to remove them?

My position is no. In my experience, they won’t give you back nearly as much disk space as you expect, and they’re not impacting system performance if they’re not being used.

If you’re in a disk space crunch, approach the problem by seeing what’s using the most space. You’ll get more space more quickly if you approach it by looking for the space hogs first. While it might seem like multiple Visual C++ Redistributables add up to a lot of space, in practice, they don’t — at least not in comparison to other things on your machine.

If you’re not running low on disk space, I wouldn’t spend any time on it.

When you remove components designed to be shared, there’s always a risk of breaking something. There’s no simple way to be sure no program on your machine needs them.

The one true way

There is one way guaranteed to leave you with only the Visual C++ Redistributables you need.

This will leave your machine with only the redistributables you need, installed by the applications you use.

And after all that, you may find you’re right back where you started.

In my opinion, it’s just not worth it. 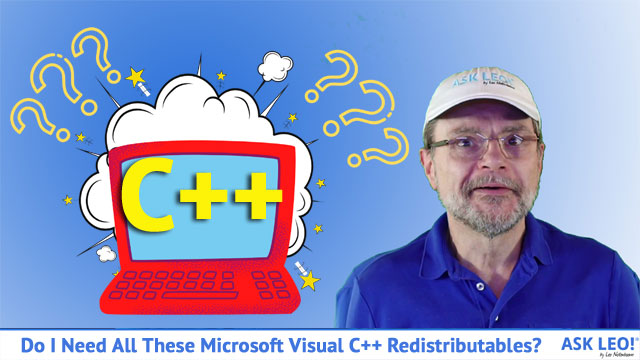 1: Older versions of Windows list them in the Add/Remove programs section of Control Panel.

97 comments on “Do I Need All These Microsoft Visual C++ Redistributables?”