Should I defrag my external hard drive? I thought I should as it contains some important documents and my computer backups. As such, I tried to use Defraggler (Piriform Ltd”s program) for the purpose. The program has been running on my external hard drive (capacity 2T) for the past 10 hours and it has done only 10% of defrag. The analysis does say that there are 32 fragmented files and 92% fragmentation. Is there anything I am not doing right? How should I defrag this drive, if I should?

While there are alternatives, you’re doing it right; Defraggler is a fine program to use.

The more important question is that, even with “92%” fragmentation, should you even be bothering?

Defragging is all about performance

The primary reason to defragment or “defrag” a disk drive is performance. A defrag operation simply moves the files and file-parts around on the hard disk’s surface so they’re physically closer to one another. The second part of a file will follow the first, for example, rather than being on some other random place on the disk that takes more time to access. (Defragging doesn’t apply to solid state drives because there is no performance penalty based on the location of data on the media.)

Thus, it’s important that internal drives be defragmented periodically, particularly the drive from which you run Windows and/or store the data you access frequently. Since version 7, by default Windows handles this for you automatically, once a week.

By far the biggest impact on external drive performance is the speed of the interface used. USB 2, for example, is significantly slower than USB 3. Even assuming you’re running the faster USB 3 interface, it may still be slower than the hard disk inside the external enclosure.

USB 2 is supposed to be able to transfer data at up to 60 megabytes per second (MBps)1. USB 3 tops out at 640MBps. While hard drive transfer rates are complex to calculate and nearly impossible to predict, a fine and extremely ballpark number we can use is 100MBps2. Before we even start, the USB 2 interface is close to half the hard disk speed we’re dealing with.

All that is to say that when it all comes down to it, speeding up the hard disk connected via an external interface is unlikely to show significant performance improvement.

But there’s one more argument against it.

Performance only matters when you use it

If your external drive is nothing more than a backup drive where you occasionally store copies of files or baclup image files, you’re not really using the drive in a way where performance would even matter most of the time. You could speed up that drive and you’d never notice a difference.

Any performance gains achieved by defragging only matter if two things are true:

If either of those is false, then there’s probably no point.

But I have seen situations where both are true.

There are several approaches to defragging.

The most common is to right-click on the drive in Windows File Explorer, click on Properties, click on the Tools tab, and then click on Optimize. The result will be the Windows “Optimize Drives” utility.

Optimization is, primarily defragmentation. Click on the drive you want to defragment, click on Optimize, and Windows will go to work.

You can also run the Defrag command in an administrative Windows Command Prompt.

Here I’ve entered “defrag e:” and the system has begun the operation to defragment my external E: drive.

Finally, you can certainly use third-party tools like Defraggler if you like a more active, visual display.

The appeal here is that Defraggler does a good job of visually indicating what’s happening, and provides a fair amount of information about the drive in question.

I don’t worry about defragging external drives unless I expect to use them heavily in performance-impacting ways.

Most of the time, that means I don’t defrag my external drives at all. 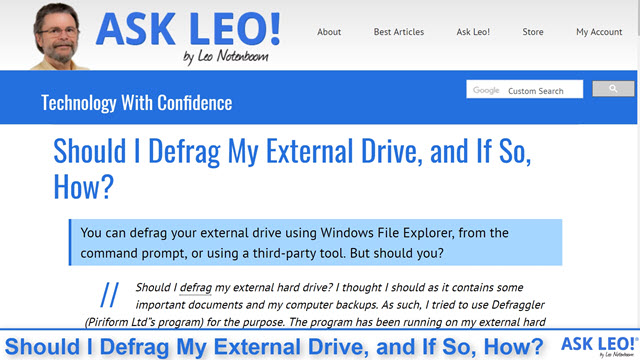 1: Upper-case MB indicates bytes; lowercase mb would indicate bits. There are 8 bits to a byte.

2: It’s an order-of-magnitude guestimate based on looking at some actual transfer speed reports. It’s really, REALLY difficult to get a definitive number for this, simply because so many factors are at play.

10 comments on “Should I Defrag My External Drive, and If So, How?”