They aren’t cast in stone.

Drive letters like C:, D: and so on are assigned by Windows to reference your hard disks. They are not all cast in stone; most drive letters can be changed.
Applies to Windows: 11, 10
I have two hard disc drives and a CD-rom drive on my computer. The HDDs are C and E, and the cd rom drive is D. Is it possible to swap the HDD letters, i.e., C becomes E and E becomes C? Or are the letters fixed at the time of format?

Drive letters are not assigned at format time, and yes, they can be changed. In fact, it’s quite easy to change them; I do it all the time — for every drive except “C:”, that is. “C:” is special.

First, let’s look at the how.

Right-click on the Start menu and click on Disk management.

This will bring up the Disk Management tool.

You’ll see that I have several disks:

Having that second drive assigned “L:” seems somewhat odd,1 so let’s change it.

Close any programs that might be accessing the drive you’re about to change. Right-click on the drive in Disk Management. In my case, that’s the L: drive. Click on Change Drive Letter and Paths… in the resulting context menu.

The resulting dialog will display all the drive letters currently assigned; in my case, L:.

Click on the drive letter (L: in the example above), and then on Remove. You will get a warning.

It’s not enough that you’ve closed programs currently accessing the drive. Any program configured for any reason to access drives using the old letter will need to be adjusted to use the drive letter we’re about to assign. You may get additional warnings if the drive is still in use. You can proceed and then reboot when we’re done for the changes to take effect, so click Yes.

Right-click on the disk in Disk Manager again (it won’t show a drive letter, since we just removed that), and click on Change Drive Letter and Paths… again. This time, click on the Add… button in the resulting dialog. You’ll be presented with a dialog allowing you to select from available drive letters.

I’ve clicked on D — a more sensible assignment for an internal drive. Click on OK to make the assignment.

You can exit the Disk Management tool. Reboot if you were warned earlier about the drive being in use.

You might infer from the interface that you can assign multiple drive letters to the same drive. You cannot. If you try to Add without Removing first, the ability to assign a drive letter will be grayed out.

If you’re dealing with a monster machine with over 26 drives attached (or connected via networking), you’ll need to use the path technique. 26 Drives? Is There a Way Around the 26-drive Limit in Windows? describes your solution.

Paths, referenced throughout the dialog, are an alternate way to refer to drives without consuming another drive letter. It’s an advanced topic, and I won’t go into detail, but the short version is simply:

Now you can access the contents of the D: drive as if it were in the “D-Drive” folder on C:. You can even remove the drive letter assignment, if you like, and only access it via that path.

An important word about C:

Do not change the drive letter of your system drive. In most cases, that is C:.

Use them if you like. Other than feeling a little odd to have disks “before” the C: drive, there’s no longer any reason not to use them.

A: and B: were originally reserved for two floppy drives that were used on the first PCs before hard drives were added. When hard drives came along, they were assigned the next available letter, C:. While floppy drives are no longer common, the default hard drive assignment at C: has persisted, and A: and B: are available for use however you like. 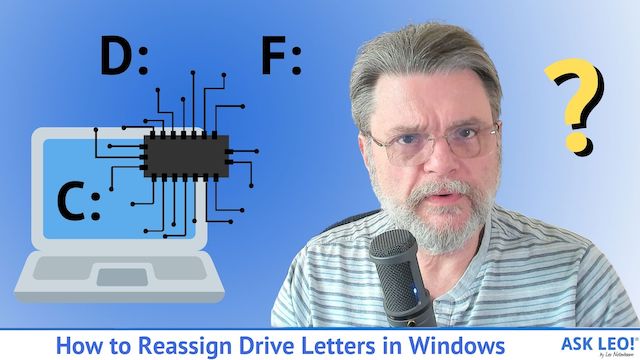 1: Not unsurprisingly, it’s a side effect of me playing with this feature in preparation for updating this article.

82 comments on “How to Reassign Drive Letters in Windows”