Attacks on the internet demonstrate that the so-called "internet of things" lacks basic security considerations.
I am concerned about denial-of-service attacks that have, evidently, been driven by huge numbers of compromised internet-connected devices. I don’t want any of my devices to be part of that attack. All of my internet-connected devices are located behind my router (granted, an old Linksys BEFSR81) and password protected. Is everything sufficiently “hidden” from internet attacks?? In any event, are strong passwords enough to prevent rogue access?

So how do you protect yourself from being part of the problem? Well, as with so many things, there’s no clear or absolute answer.

But I do have a couple of ideas.

With so many non-traditional items being rushed to market and connected to the internet, it’s no surprise that security is often an afterthought. The best you can do is make sure to change default passwords for those devices that have them. While IoT devices can be incredibly convenient, make sure that you’re making a conscious, conscientious choice when adding them to your home network.

IoT: the Internet of Things

The IoT is nothing special, really. It’s not another network, it’s not something super-secret or super complex. In fact, you probably already have devices that are part of it.

Your PC, laptop, smartphone, and tablet are all things we conceptualize as computers. Even your printers and gaming consoles are easily understood to be computers on the inside. Naturally, your router and other networking devices are also what we’d call “traditional” things connected to the internet.

On the other hand, so-called “smart” TVs, security cameras, light switches, light bulbs, refrigerators, washing machines, and perhaps even toasters1 are being connected to the internet for a variety of purposes. Whether you think it’s the best thing since remotely-controlled sliced bread or the silliest thing you’ve ever heard, the internet is being used for all sorts of things we’d never considered before.

That whole “never considered” thing is actually part of the problem.

The (lack of) security of things

Who would want to hack a light bulb?

That appears to be exactly the kind of thing that appears to be happening in distributed denial of service (DDOS) attacks. This occurs when of a bunch of infected computers are all instructed to access a specific website or service simultaneously, crashing it.

Hackers aren’t interested in playing with your lighting. They are interested in using the tiny computer inside your light bulb (or other internet-connected smart devices) for their purposes elsewhere.

Computer in your light bulb?

Indeed. The easiest and cheapest way to make a device connect to the internet is through a general-purpose interface that is, for all intents and purposes, a computer. It may not run Windows (though it might be running Linux), and it may not have as many functions as your desktop, but it’s a computer nonetheless. The protocols used to connect to the internet, as well as interface with the device itself, are complex enough that a fair amount of computing power is required to make it happen.

And computing power is dirt cheap these days.

What we’re finding is that security is often an afterthought.

What can you do?

Being behind a router is the first step. The problem is, it’s a step most people have already taken — yet internet-connected devices are being hacked on a regular basis anyway.

The single most important step? Change the default password on every internet-connected device you own that has a password.

Apparently, a large number of hacks have been simply attackers discovering the device through some means and then being able to log in to the administration of the device because the owner never changed the default password.

In this case, it seems just about anything other than the default will cause attackers to move on, looking for a vulnerable device elsewhere. Use a strong password anyway, to future-proof yourself from the day when hackers get more aggressive. It’s very likely, for example, that devices do not have brute force log-in protection, and could allow an attacker to try to log in using every possible password.

What you can’t fix

What you can’t fix is bad design.2

There are so many ways these inexpensive internet-connected devices can communicate, there’s a near endless supply of things that could go wrong.

For example, many devices use unencrypted connections to reach out to the internet because https takes more work. That means it’s possible for hackers to see and perhaps intercept traffic to and from the devices behind your router. It’s possible that a single compromised device could expose other devices behind your router. Or it could mean nothing at all, depending on the device.

Unfortunately, aside from paying attention to news reports listing specific brands, devices, and models, there’s no practical way to know if your devices are involved.

Aside from disconnecting it from the internet, it’s almost impossible to know whether or not your refrigerator — or your toaster — is helping to take down websites.

I have more IoT devices now than when I first wrote this article.

Many devices fall into the category of “traditional” devices. Computers, laptops, mobile phones — even Amazon’s Echo — all qualify as more-or-less full-fledged computers.

The big addition for me has been light switches. It’s very (very) convenient to be able to say “Alexa, turn on the patio lights”, or even have Alexa manage a schedule for automatically turning lights on and off whether or not we’re home.

I do have so-called “smart” TVs, but it didn’t take long for me to feel they weren’t smart enough. Mostly in the interest of preserving internet bandwidth, I leave them disconnected. I notice no function or feature loss by using them without connectivity. The Roku streaming devices plugged into them have their own connectivity.

I do not have an internet-connected fridge or toaster.

What’s particularly frustrating for internet technologists is that we’ve been here before.

All the lessons we’ve learned over the years from technologies like Bluetooth (originally very insecure), wireless keyboards, and even the Wi-Fi protocols we use every day have been, for the large part, ignored by the manufacturers of these new internet-connected devices. They opted for cheap and fast-to-market over keeping things secure.3

So we learn the lessons again. 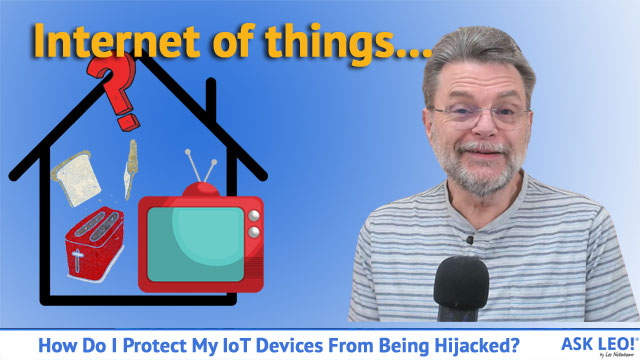 1: One concept toaster gets the daily weather forecast from the internet and burns it onto your toast.

2: I was tempted to title this section “You can’t fix stupid”, but that’s not actually fair. Most of the decisions that have lead to this situation aren’t as much about stupidity as they are about time pressure, ignorance, and failing to learn the lessons of the past.

3: It’s actually a complex equation. Consumers don’t care about their refrigerator being secure, as long as it works. It’s a hard sell to convince consumers to pay extra or wait longer so their fridge can’t participate in the take-down of some random site on the internet.

15 comments on “How Do I Protect My IoT Devices from Being Hijacked?”