Not Responding is Windows' way of telling you that a program might have a problem. Sometimes it's benign, but sometimes it's a sign of a deeper issue.
I am having difficulty when I am browsing or using a program. After a few minutes the computer freezes and I get a message in parenthesis saying (Not Responding). Sometimes I have to log off and log on again to fix this problem. But after a few minutes it happens again. How can I fix this?

“Not Responding” appears in the title bar of a program when Windows detects that the program isn’t behaving properly. Exactly why depends on the specific program and what you were doing at the time.

Let’s look at some of the possibilities, which range from software or hardware problems to user impatience.

“Not responding” happens when a program stops interacting with Windows properly. This can be due to legitimate delays, as the program is busy working. It can also be due to errors of various sorts including a programming bug, a design error, a hardware problem, malware, and more.

Programs are expected to respond to Windows

Windows expects a running program to “interact” with it and respond to its requests in a timely fashion.

When Windows asks a program to do something like take a keystroke or close itself, and the program fails to acknowledge the request within a certain amount of time, the program is classified as “Not Responding”.

If the program never comes out of that state, we also call it “hung”, as in “hung up” on something.

There are “legitimate” reasons this can happen.

For example, if the program you’re using is doing some very long, CPU-intensive calculation, it might not respond in a timely fashion — for example, a video editing program performing some operation on a large video, or a spreadsheet performing a lengthy calculation. If, during the operation or calculation, you attempt to close the window and nothing happens, Windows might eventually add “(Not Responding)” to the title bar. It tried to pass your request to the application, but the app isn’t listening.

While it’s bad design to not respond while performing lengthy calculations, it’s also allowed and legitimate. Once the calculation is complete, the program starts listening and responding again.

A different example is a program trying to access something over a network (like the internet). If the connection is bad or the remote server is slow, the program might spend a long time waiting for a response. During that time it might well become unresponsive. Once the response arrives, it becomes responsive once again.

Anything causing an application to stop responding to your input, or to Windows’ internal requests, can cause “Not Responding” to appear in the title bar.

While lengthy calculations are one semi-legitimate cause, there are many other possibilities as well.

It could be anything

It boils down to “it could be anything”, which is, unfortunately, fairly accurate. The actual cause and solution depends on the specifics of what you’re seeing.

Does it happen all the time, or only when you do certain things? One specific application, or several? All of these things and more are clues necessary to ferret out the cause and come to a solution.

Without more specifics, my general recommendation is to make sure all your software and drivers are up to date, and make sure your security software is working and up to date.

If the problems persist, try to narrow down the common causes, if any. 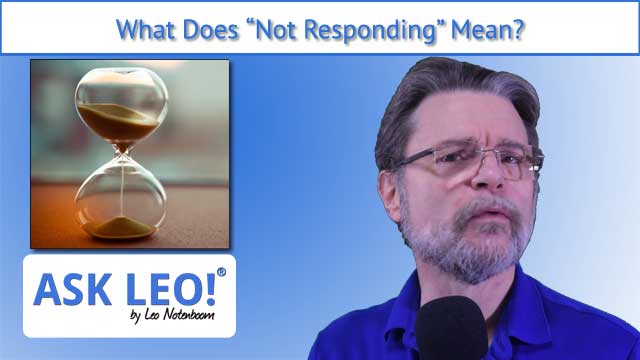 39 comments on “What Does “Not Responding” Mean?”