Movement can come from many places, benign and malicious.

Occasionally, your mouse cursor may seem to move on its own. There are benign and easily resolved causes of this as well as occasionally malicious reasons.
If someone (not you) has control of your cursor — even if nothing else on the screen is changing — they are exercising control of your machine. Cursors do not idly float around the screen. Right? Important question. And the answer is: ??

The answer is: maybe.

Or perhaps: it depends.

There are several reasons cursors appear to move around the screen on their own. Some are malicious and some are not. In addition, many of the techniques used by hackers avoid moving the mouse anyway.

I think the real answer is: it’s complicated.

Mouse pointers most often move on their own because of dirt on the mousing surface or dirt within the mouse itself. Sometimes the surface, even clean, can be ‘confusing’ to mouse electronics, which can manifest as autonomous movement. While malicious movement is possible through traditional remote-access software, bad actors more commonly take steps to hide what they’re doing, thus not moving the mouse pointer at all. As always, if you suspect malware, run up-to-date security scans.

Honestly, the most common reason I’ve run across mouse pointers going for a random walk around my screen has nothing to do with hackers or malicious software.

Either the mouse sensor is dirty, or the surface it’s on is dirty. That can easily confuse the mouse into thinking it’s being moved around, and as a result, the mouse pointer on the screen will move around as well.

Another more consistent cause: the surface your mouse is on is confusing the device. By that, I mean that your mouse and surface are clean, but the nature of the surface itself makes it difficult for the mouse’s movement sensor to get a clear reading. I’ve seen the mouse pointer move around randomly because the surface on which the mouse was placed just wasn’t compatible with the mouse.

The sensitivity of your specific mouse plays a large role in this, but step one in all these cases is to clean the underside of the mouse and the surface it’s on. Remove any dust and debris you find.

And try putting the mouse on a mousepad, or even just a sheet of paper, to rule out the surface as being the cause.

If you’ve ever used a remote desktop program like LogMeIn, Team Viewer, Chrome Remote Desktop, or others, you’ve already seen the mouse moving under someone else’s control. Kind of spooky, isn’t it?

This is what most people think of when they see the mouse moving on its own. They assume someone is using a remote access tool to “drive” their computer.

First, the mouse movement would not be “random”. If someone has malicious access to your machine that manifests in this manner, you’ll see the mouse moving deliberately. You’re more likely to notice programs start, windows open and close, and more. Malicious activity involves much more than jiggling the mouse a little.

Second, most of these types of tools require you to explicitly allow access to your machine. Since you’re asking the question, I’ll assume you haven’t done that.

So, no, mouse movement doesn’t generally imply malicious remote access. It can, but usually it does not.

One of the reasons I’m so skeptical of mouse movement indicating something bad is that hackers try to avoid it in the first place.

Most malicious software installed on people’s machines that allows remote access is hidden, and would never appear as anything on your screen at all. Bots, RATs (Remote Access Trojans), and others all take steps to hide everything they’re doing from view.

The majority are likely to be similar to command-line windows that you’ll never, ever see.

If none of the explanations above convince you, or if you’re just still concerned, there’s a simple test.

Disconnect your machine from your network. Unplug the ethernet cable or turn off Wi-Fi.

If the mouse is still moving randomly, it can’t be due to remote access.

Movement or not, stay safe

Regardless of whether you see unexplained mouse movement or not, it’s always a good thing to make sure your security software is up to date and running properly. You might, if you like, use this as an opportunity to perform a full security scan to put your mind at ease.

Why is my mouse pointer moving erratically?

There are two primary reasons a mouse pointer might move erratically as you move the mouse: dirt and software. Dirt on the mousing surface can interfere with movement detection and cause it to get confused and move vertically. Clean the surface and the underside of the mouse if you suspect this. Software running on your machine can use so much of the machine’s resources that it can’t react to mouse movement quickly, which manifests as erratic or jerky motion. Keep an eye on what’s running on your machine when this happens.

Touchpad cursor moving on its own?

In general, the single most common reason that a touchpad pointer or cursor might move “on its own” is if you accidentally brush against the touchpad while doing something else. It’s easy not to notice that this is happening. Check to see if your touchpad has a sensitivity adjustment. If you don’t actually use the touchpad, see if there’s a setting to turn it off completely. 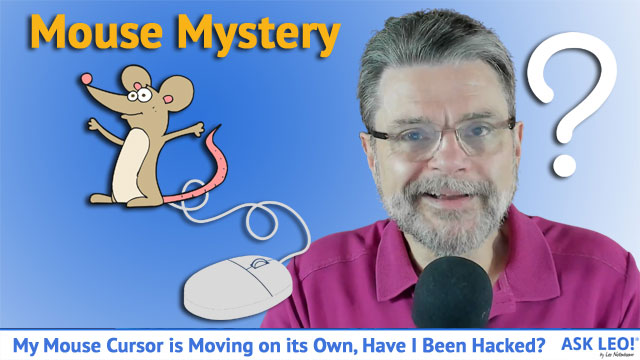 9 comments on “My Mouse Cursor is Moving on its Own. Have I Been Hacked?”