The system image (or image backup) of a computer includes everything on the primary hard drive that would be required to restore a working system to a completely empty replacement drive.

Or put more simply – an image backup backs up everything.

The example system that we’re backing up looks like this in Macrium Reflect: 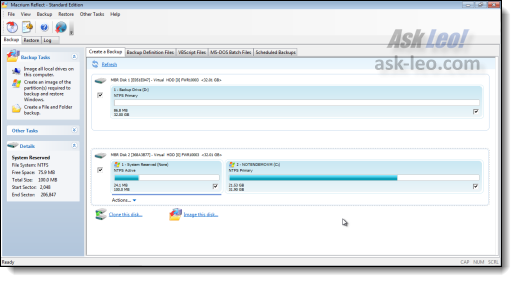 The upper drive is our backup drive – the D: drive.

The lower drive is our system drive and has two partitions:

The System Reserved partition and the C: drive. In addition, this drive has a master boot record (MBR). A system image will back up all of this.

On the left, Macrium includes a useful button to begin the process:

Click “Create an image of the partition(s) required to backup and restore Windows” to get things started. 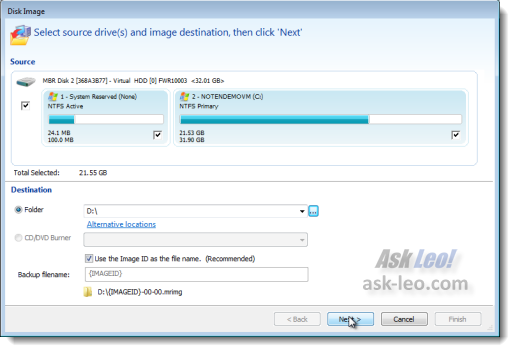 The upper part of the resulting dialog will have been automatically filled in with the drives necessary to backup Windows for you.

The lower portion of the dialog allows you to specify where the backup image is to be placed.

The destination folder can be any folder on an attached drive, such as an external drive, or even a folder on a network device.

The backup filename defaults to the “Image ID”. This can be fairly obscure, but you’re quite welcome to specify a name for the backup – perhaps the name of the machine being backed up. 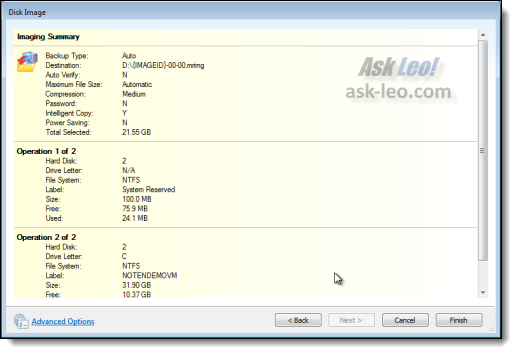 On the next screen, you’re presented with a summary of the options that you’ve selected for your backup. Click the Advanced Options link. 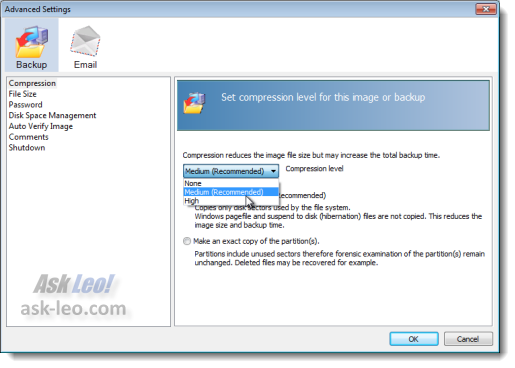 In reality, it’s safe to ignore most of the options here, but I like to increase the compression to “High” so that the backup images take as little space as possible. The trade-off is that the backup might take a little longer to run. 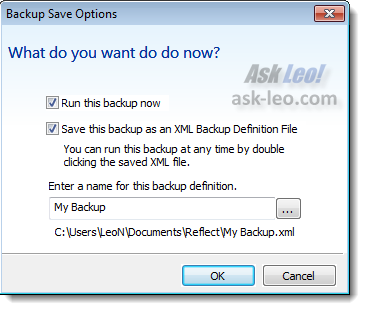 Macrium creates what’s called an “XML Backup Definition File” which saves all of the options that we’ve selected so far. This will become useful when we perform incremental backups or scheduled backups later.

Make sure that “Run this backup now” is also checked and click OK to start the actual backup.

As the backup progresses, you can click the Hide button to hide Macrium Reflect while it does its job. Just right-click its icon in the status area and click Show if you want it back.

When the backup eventually completes, Macrium will present a status message: 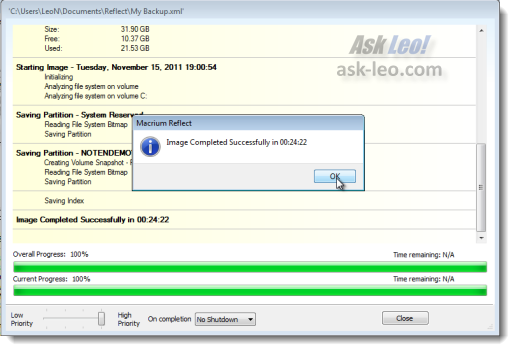 The backup is complete. You’ll find the backup image in the location you specified as a single .mrimg or Macrium Reflect IMage File.

Now that we’ve got Macrium installed and our rescue media created, it’s time to go ahead and create a base image backup of the drives that we care about.

In this particular machine, I actually have two drives. On top, you’ll see a backup drive D: and on the bottom, you’ll see a disk that has two partitions. The first being the system reserve partition and the second being the C: drive. What we’re going to do is to create an image backup of the lower drive. In this particular case, Macrium actually makes this fairly easy by simply allowing us to say, ‘Create an image of the partition(s) required to backup and restore Windows.’ It automatically selects both the reserved area and the C: drive and the master boot record which are required to restore Windows.

The destination of our backup will be the backup drive. As we saw before, the backup drive is the D: drive on this machine. You can select a local drive, an external drive or, if you want to, network drives that have sufficient capacity for the backup you’re about to create.

I’ll just go ahead and stick with the root of the D: drive as our backup location, assuming that this particular drive is dedicated to backing up this machine. You can also set your own file name; they suggest (and that’s fine) that you use the image ID as the filename. You’ll see what that looks like in a moment.

We’ll hit Next. We’re presented with a summary with what the operations are about to perform entail. There are advanced operations that are available. In general, you probably don’t need to worry about them. The only one I make a habit of changing is to increase the compression level to ‘High’ simply to make sure that the backups take up the smallest amount of space possible. That does mean that the backup itself may take a little while longer.

We’ll hit OK; we’ll hit Finish and now what’s happened is Macrium has created a definition file; a file that contains all of the options that we’ve just selected. That’ll come in handy later. For now, we’ll go ahead and save this backup file as what they call an XML Backup Definition File. You can give it its own name; they suggest My Backup as a default and we’ll go ahead and save it that way. In addition, the checkbox to ‘Run this backup now’ is also selected; we’ll let that go so both things happen when we press OK.

Since the backup is projected to take a little while, which is not uncommon for backups, you do have the option of simply hiding the program. When you do so, the program will continue running but only this little status icon down here will be displayed until the backup completes. You can restore the display of Macrium simply by right-clicking on that icon and selecting Show. And we’re done. As you can see, though it initially predicted something like 45 minutes, the actual backup took roughly 24. We’ll hit OK; we’ll close this and now you can see (we’ll open up Windows Explorer on the backup drive) and you can see there’s a 9 GB file here that contains the backup image. ‘MRIMG’ stands for Macrium Reflect Image. We have a full backup image of our system drive.

The next video in the series: Macrium Reflect 4: Making an Incremental
Backup.