Rescue media is typically a CD that you can use to boot your machine in the case that the machine’s own operating system installation has been rendered corrupt or un-bootable. The rescue media is a copy of the backup program that can then be used to restore a backup image to your machine.

Run Macrium Reflect if it’s not running already, and click the Other Tasks menu and the Create Rescue Media menu item:

In the resulting dialog, access the default Linux option for the type of rescue media to create. (I’ll discuss when to use other options below.) Either one can be used to restore Windows and other operating systems. 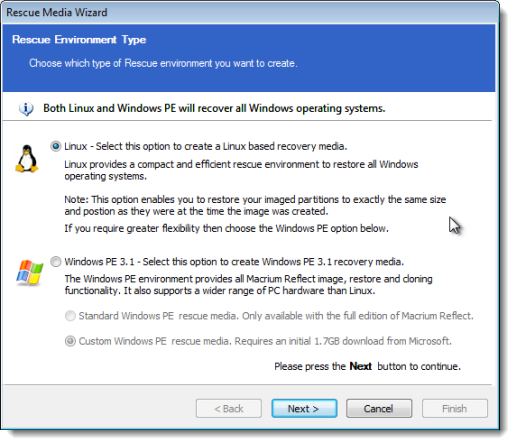 Click Next. On the next page of the wizard, you’ll select where to create the rescue media: 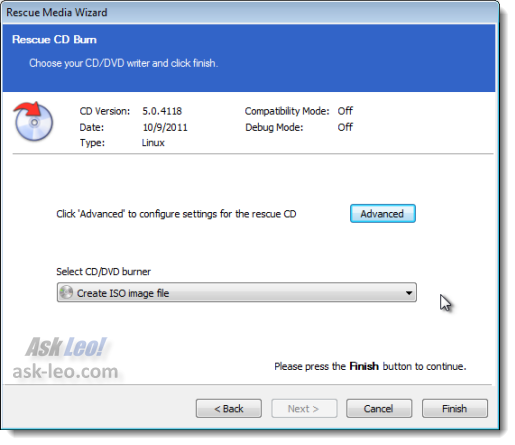 In the drop-down list under Select CD/DVD burner, choose either:

Click Next and Macrium will either begin burning the rescue media to disc, or it’ll ask you where to place the ISO file that it will create. 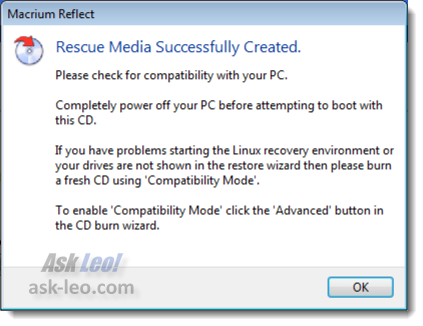 You either have rescue media ready to go or an ISO file that you can burn to disc on another machine.

At this point, I strongly suggest rebooting your computer from the rescue media that you’ve just created.

With so many different computers and backup devices out there, it’s not unheard of for rescue media (from any backup software vendor) to not necessarily boot or see your particular backup device.

Testing now, before you need it, ensures that:

That confirms that should you ever need it, you’ll be able to use that disc to boot and restore your backup.

If for some reason your test of the rescue media fails, there are two options that Macrium provides:

Burning rescue media with compatibility mode enabled would be the place to start. If that fails for some reason, then burning a Windows-based rescue media would be next (although be aware that this may require a rather large download from Microsoft).

With working rescue media in hand, you’re ready to start backing up.

After purchasing and installing backup software, one of the very first things you should do is create rescue media. Rescue media are the CDs that you might boot from should you ever need to restore your machine from some kind of an unbootable state. I’ll show you how to do that here with Macrium Reflect.

Once you start Macrium, select Other Tasks menu and the Create Rescue Media option. You have your choice of using either a Linux or Windows-based boot disk. Many people choose Linux but if you have problems booting from that media or have problems with it being able to recognize your backup device, go ahead and burn a copy of a Windows-based rescue media as well.

We’ll select Next. In this particular case, I only have the option to create an ISO image file because I do not have a CD burner on this machine. On another machine, that dropdown includes the actual drive letter for my CD burner. We can select that and Macrium will actually burn the CD directly. In this particular case, we’ll create the ISO image file that can then be taken to another machine that will be able to burn this image to a CD.

Hit Finish. We’re given the option of where we might want to store that file. I will throw that here. I’ll hit Save and the ISO file is created. If this were an actual CD burner that was available, then the CD would be burning as well. Once the ISO has been burned to CD or Macrium has burned the CD directly, you now have your bootable rescue media. It’s important at this point, before you actually need it, to actually boot from the CD that you just created.

The reason I say that is that it’s important to understand whether or not that particular version of rescue media will a.) boot your machine and b.) actually see any backup devices you have attached to your machine. Regardless of the backup program that you’re actually using, rescue CDs are notorious for not necessarily recognizing absolutely every external hard drive or backup device that you might have.

Macrium includes several options to allow you to burn different versions of rescue CDs that hopefully both boot on your machine and recognize your particular backup device. Once you have your rescue media and have tested your rescue media, you’re ready to start backing up.

The next video in the series: Macrium Reflect 3: Making an Image Backup.