Once you have a full image backup of your computer, which includes
everything on the hard drive, a series of subsequent backups can be
significantly quicker and smaller.

Incremental backups backup only those files that have changed since the
immediately preceding backup. Because many of the files on our computers are
essentially unchanging, this can represent a significant saving in both time and
space.

When we created our full system image backup, Macrium also created a “backup definition file” that contained all of the settings associated with that backup, including the drives to be backed up, the location in which to place the backup, and any additional configuration settings.

It’s that backup definition file that we use now. 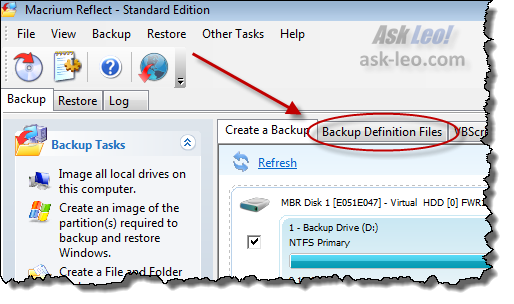 In the resulting list of backup definition files, right-click the one that represents the full backup that you’ve already taken. 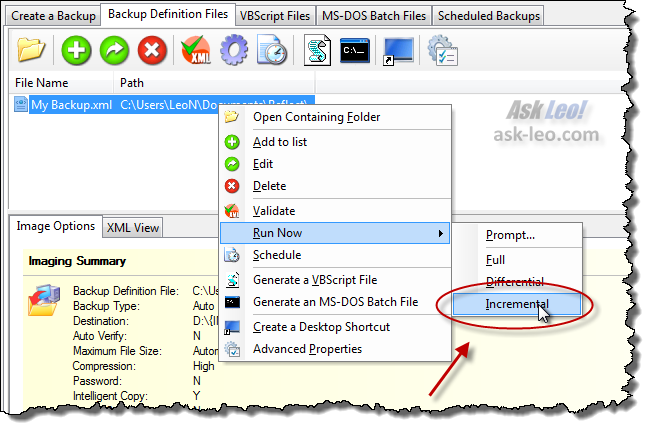 The incremental backup will start immediately.

The backup should take less time because fewer files will need to be backed up.

Once complete, you’ll have two (or more) files for the backup set:

In a previous video, we created a full image backup. Now, based on that image backup, it’s time to start creating incremental backups that build on top of it.

Once again, it’s a backup of our C: drive and its destination is the D: drive root. We right-click on the file that we’re going to do; select Run Now and Incremental – that’s it. The incremental backup is underway. This should be significantly quicker than the full backup as it should only copy those files that have changed since the full backup was taken.

As you can see, this time our backup took less than five minutes. If we go take a look at the D: drive where the backup was placed, we’ll find there are now two files: One, the original full image backup that we took originally and a second one with the same backup ID number, but an incrementing number next to it. That image is the incremental image of things that changed between the time we that took the original backup and the incremental.

The next video in the series: Macrium Reflect 5: Scheduling Backups.