Good practice in a corporate environment seems to be to force network and other password changes every 30 days or so. This would seem to be overkill in the home environment as it could result in some accounts being accessed more often to change a password than to do anything else.

Unless you get into a good routine, like when you do data backups, password changes will only get done sporadically, if at all.

Do you have a view on how to build such a good routine?

As you say, routines for things like this are difficult to set up, and if not automated, they are easily forgotten. Automation may be the answer in many cases, but it’s not always available – at least not in a convenient form.

But before we even get to that, I want to talk about the “you should change your password periodically” rule of thumb.

Conventional wisdom is you should change your password every so often.

I know of no good reason to do that.

There’s nothing about the age of a password that makes it lose quality over time.

The vast majority of password-based hacks are due to weak passwords, sharing passwords when you shouldn’t, phishing attacks, and technology-based compromises, like malware (especially keyloggers). They get your current password, without regard to its age. It doesn’t matter whether you changed it last week or last year; they have it right now.

Periodically changing your password adds a tiny layer of security that avoids less common threats: the compromise of an old database of accounts and passwords, perhaps. These things do happen; just not nearly as often as the more common compromises above. Even when they do, more often than not, your password is never exposed because of the way these databases are maintained.

There are situations where you do want to change your password, but they’re not tied to a schedule or length of time.

So, how to automate it?

The only approach I can think of is to set a reminder in your calendar. The problem is changing your password on all your accounts (I have something like 350 listed in LastPass) just isn’t practical. As a result, we skip it.

Technology is the other approach.  There are systems — including Windows itself — that can be configured to require you to change your password according to a set schedule. The problem here is most password-requiring systems don’t include this type of functionality. For example, the major free email providers do not.

But as you can see, I’ve come to the conclusion that a periodic password-changing routine isn’t as important as we’ve been led to believe.

The power of determination

I’ll end this with a story I’ve seen happen (and also overheard in an episode of Security Now!):

A company had configured its Windows logins to require a new password every 30 days. It had also configured the system so you couldn’t re-use your last five passwords; you had to come up with a new one each time.

So one individual, every 30 days, would change his password six times in succession, so his current password would be forgotten by the system and he could use it again.

Yes, he changed his passwords six times in a row, so that he could end up with his favorite password — unchanged.

Users can be … innovative … at getting what they want. 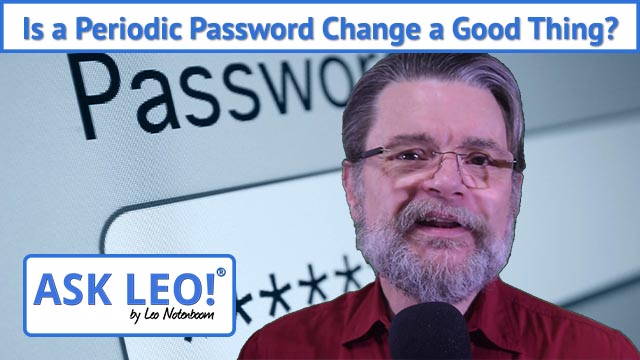 108 comments on “Is a Periodic Password Change a Good Thing?”