Is there a real, complete and reliable equivalent to Windows? Other than that Apple stuff.

That’s a question I received not long ago. Particularly given the publicity around some of the issues with Windows 10 and its updates, I think many frustrated users are wondering if there isn’t something else they could or should be using.

The answer is my most common: it depends.

There is no exact replacement for Microsoft Windows. Whether any alternative will work for you depends on how that alternative’s characteristics compare to your needs.

The most commonly considered alternatives include Apple’s OS X on Macs, Linux, and the Google Chrome operating systems. They each have significant pitfalls, depending on what you expect.

OS X runs (legally1) only on Apple hardware, so switching means getting a new computer and learning the nuances of OS X’s interface (just as you learned the nuances of Windows). It also means replacing all the software you use, as OS X does not run Windows applications. You’ll need to get Mac versions of software, like Microsoft Office, for example, or alternative applications that serve the same need, such as LibreOffice or Open Office.

Linux is free and runs on almost any PC, even an old one collecting dust in a closet. There are a confusing number of distributions to choose from, with Ubuntu and Mint being the most popular for Windows expats. Like OS X, Linux does not run Windows applications2, so you’ll be looking for alternatives. Unfortunately, true Linux versions of Windows applications are very rare. You’ll need to find alternative applications that serve the same needs.

Google Chrome OS is available only on “Chromebooks” — laptops specifically designed to run the Chrome OS — so you’ll be getting a new machine to go this route. Once again, Chrome OS does not run Windows software, so you’ll be looking for alternatives. The good news here is that many Chromebooks can also run Android applications, where there often are official versions of Windows applications. These versions are often stripped-down equivalents to those you might find on Windows, but again, depending on your needs, they may be enough.

That phrase “depending on your needs” keeps coming up. Every person has different needs and expectations, and all of the alternatives have different pros and cons when compared to those needs.

If you need the power of a fully powered, popular, operating system with a corporation standing behind it to update and support it, and with numerous familiar applications that can do just about anything, a Mac might be the only real alternative for you.

If you just need to put something else on your existing hardware, and are willing to take the time to look for and learn about alternatives for the applications you’re used to running on Windows, Linux could be a choice. Note that online help for Linux runs that gamut from non-existent to somewhat helpful to downright belligerent at times, so be sure to pack a fair amount of patience. Unfortunately, there’s a reason Linux is still considered an OS for geeks (albeit a good one)3.

If all you do is browse the web and send email, with a few other light tasks occasionally, it’s possible a Chromebook might be right up your alley. There’s a strong argument for it being more secure than the alternatives above. Just don’t expect to do any heavy tasks like photo or video editing.

In all cases, be prepared to learn. In fact, be prepared to spend a lot of time learning, and in turn learning a lot. Each of these operating systems is similar to yet different from Windows. They each have the same concepts — files, menus, apps, browsers, and so on — but the specifics of how you interact with each is different. It will take some time to get used to a different way of doing things.

Interestingly, particularly among the younger crowd, there’s a move to rely solely on mobile devices like your phone (Android or iPhone) or tablet (such as an iPad). I know several folks who’ve switched to devices like these almost exclusively.

Once again, it all depends on how you use your technology and what you want to accomplish with it. Mobile devices are great for many things, but not everything. Depending on your mix of activities, you may find you can go completely mobile only, use a mobile 90% of the time with that old Windows computer in the basement for times when a phone just won’t do, or realize that yes, you really do need a “real” computer to meet your needs.

The devil you know

Finally, I have to add that every alternative could give you a case of exchanging one set of problems for another. I know many people who are Apple- or Google-averse for privacy and control reasons. My experience with Linux is that it’s rare a day goes by without some kind of update to install.

None of the alternatives are frustration-free.

Depending on your reasons for looking, do enough research to make sure you don’t end up with something that frustrates you more than what you’re trying to escape. 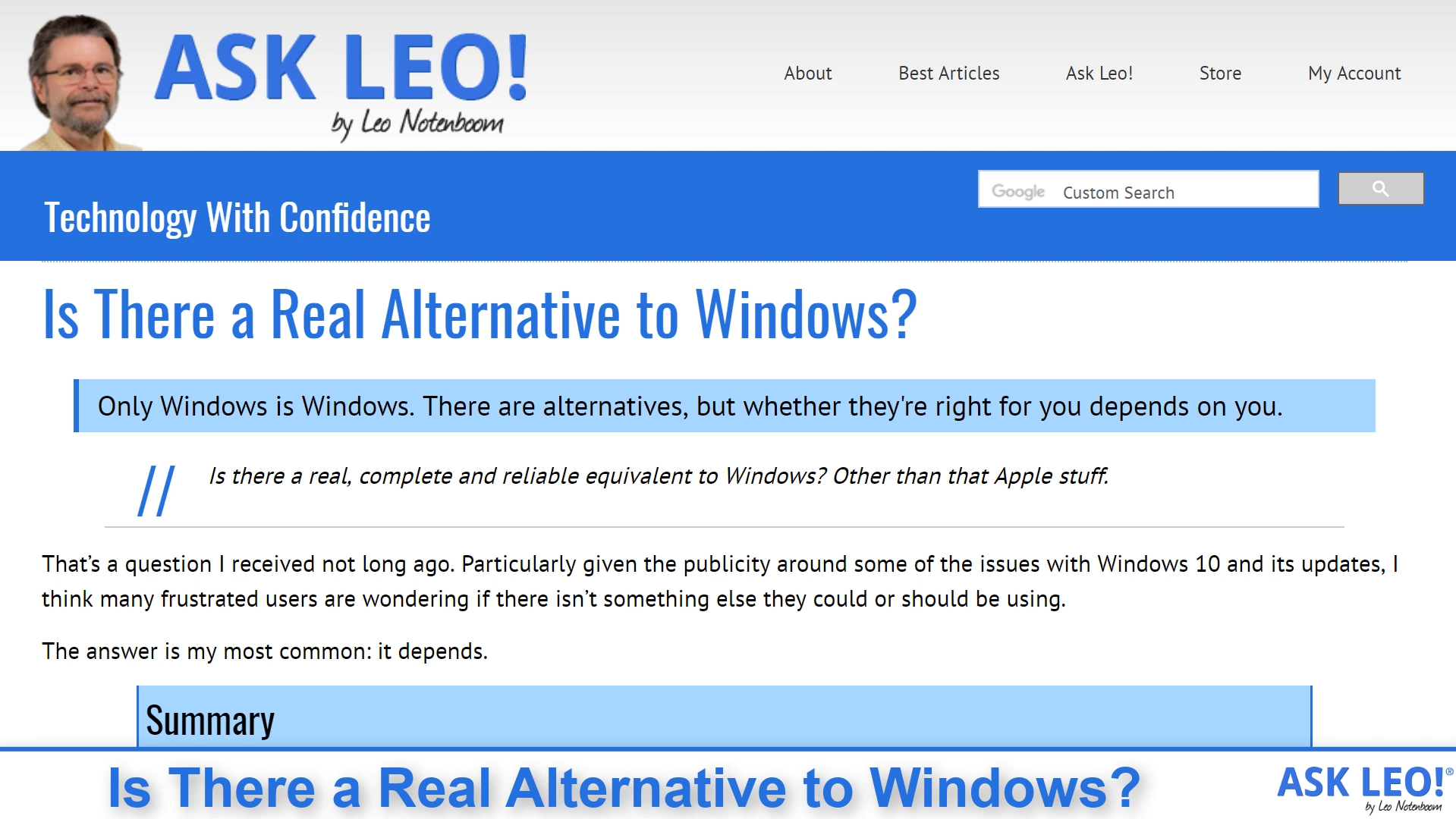 1: There is a project called Hackintosh, but as its name implies, it’s more than a tad geeky, and certainly not supported by Apple.

2: You’ll hear references to something called “WINE” to run Windows applications on certain Linux platforms. Again, geeky, and in my experience, the resulting performance of the applications that work leaves much to be desired.

3: Indeed, if I didn’t do what I do for a living, there’s a real possibility I’d be running Debian Linux on my primary machine. If you’re anywhere near being a computer geek or hobbyist, it’s worth playing with.

88 comments on “Is There a Real Alternative to Windows?”