Regarding your article What’s the difference between a hub, a switch, and a router? your description of routers raised a question. When using NAT, how does the router know which local IP address should receive an incoming packet? Using your example network, suppose computer “A” sends out a packet to someone on the internet. But what if at the SAME time, computer “B” sends out a packet to the SAME someone?

It turns out that NAT, or Network Address Translation, is actually a very simple concept; one that we rely on every day to share a single internet connection across multiple computers as well as to keep those computers safe from internet threats.

Simple in concept, maybe, but difficult — complex even — to explain.

First, we have to understand how a simple computer-to-computer connection works in TCP/IP.

When data is transmitted from one computer to another over TCP/IP, two pieces of information are needed:

Port numbers are used to define the kind of data being sent. For example, port 25 is a port used to send email. A server configured to receive data on port 25 expects it to be the SMTP mail sending protocol.

A port number is required in both directions.

When a data conversation is to happen — in other words, data is being transmitted in both directions — not only must a computer send to a particular IP address and port number, but responses must also be sent to a specific IP address and port number. (And for the record, almost every TCP/IP connection is a conversation – even if the data coming back is only to periodically say, “Yep, I got that. Send me more”.)

When a connection for a conversation (like sending mail) is established, the initiator of the conversation contacts a specific port at a specific IP address, and also says, “My IP address is x.x.x.x and I’m ready to accept your response on port yyyy.” I’ll refer to “yyyy” as the response-port.

Response-port numbers are not standard — they’re made up and assigned when a connection is created so the software knows anything it receives on port “yyyy” is something in response to the conversation it initiated. 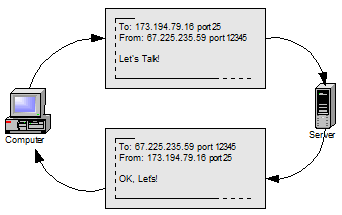 In the diagram above, the computer is establishing an email sending connection (port 25) to the computer at the IP address 173.194.79.16. It includes its own IP address and makes up a port number (12345 above) as the response-port for any data received back as part of the conversation.

We have a conversation.

If we insert a router into the picture, things get interesting. 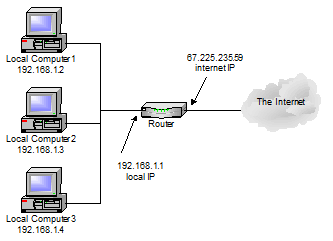 Let’s revisit our TCP/IP conversation from above, but this time inserting the NAT router into the mix.

Computer #1 wants to send mail. It gets the IP address of the remote sever and sends a request to connect to port 25 on that server.

But … where does it send it? It’s not actually connected directly to the internet. In fact, the only devices that it can talk to directly are the other computers on the LAN and the router.

That’s where this concept of a gateway comes in. Connections to devices that are not on the local network are sent via the device at the gateway IP address.

In other words, the router.

Note that the router tells the remote service to connect to it – the router – for the return path of the conversation.

What’s important to note in the conversation diagrammed above is how the router replaces the “from” IP address and response-port number with its own on outgoing data and how it reverses that on data coming back in the conversation.

And now we have enough background to ask the question in terms that we can answer.

How did the router know that the returned data should be send to that specific computer on the local network?

The router as traffic cop

Recall that I said that the port numbers used for returned data – the response-ports – were simply made up. In “I’m ready to receive your response on my IP address x.x.x.x on port yyyy,” the value of “yyyy” could be anything in acceptable port-number ranges.

It used a different response-port number, a number that it made up.

But a number that it remembers and keeps track of.

For each outgoing connection, the router remembers what outgoing response-port is assigned for each local IP and response-port number that it was given.

That’s all it has to remember.

As soon as the connection between the local computer and the remote server is closed and that conversation is over, the router can simply forget this information because there’s no need to use it again.

The next time that a new connection is made, the router will simply assign a different “get back to me here” response-port.

That’s also how the router can handle multiple simultaneous connections from multiple local computers: it simply assigns each connection a different internet-side response port and keeps track of which local computer and port it corresponds to.

Now we’re also in a position to understand why NAT routers make such fantastic incoming firewalls.

For every outbound connection established by a local computer, the router keeps track of the ports assigned; based on that, it can route the incoming data back to the computer that’s participating in that conversation.