I have a home network set up where my router is connected to an access
point. That access point talks wireless to another access point on the
property. That access point is then hooked to a PC with ethernet. I have just
purchased a laptop with wireless capability. My question is how can i access
the internet at the remote location wireless? Can i somehow use the 2nd access
point? Right now they are set up to only talk to each other.

What you describe as having could be done several different ways, so it’s
difficult for me to give a specific recommendation without knowing your
situation exactly.

However, it’s not at all uncommon for people to want to extend their
wireless network somehow, or use wireless technology to extend their wired
network.

We’ll look at a couple of ways to do that, and see if we can’t solve your
problem along the way.

First let’s look at what I believe you’ve described:

On the left we have your router sharing connectivity to the internet between
one or more computers and an access point. On the left, we have another access
point configured to act as a bridge, into which you’ve plugged your PC using an
ethernet or wired connection.

I’m assuming that the access point on the right is configured to act as a
bridge.

As we’ll see in a moment, it can actually do a little more than that.

“An access point and a bridge are not the same
thing.”

I also want to point out that there are wireless devices that simple
are bridges. Rather than configuring an access point to “act like” a
bridge, a dedicated bridge is typically much simpler to set up for its
purpose.

In your case, since you’re just adding a laptop to the mix, as long as it’s
in rage, I’m tempted to suggest that you go the simple route if you can: 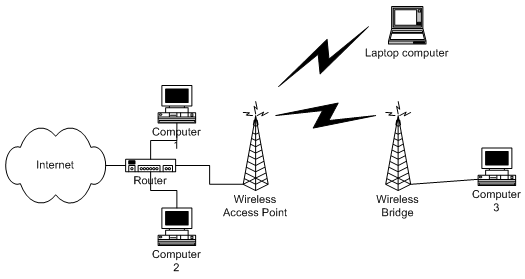 In this case the laptop simply connected to the existing wireless network
via the access point on the left. No tricks or games, no additional hardware,
it’s just the normal way to connect a laptop to an existing network.

If that’s not acceptable – perhaps the laptop is too far away from the
access point to connect solidly, my next option is to add a hub:

Here you can see we’ve placed a hub between the bridge and the wired
computer on the right, and connected the laptop to that hub. In fact, you could
add several additional computers to that hub, and they’d all be able to share
the wireless connection that the bridge provides. This is a common way to
extend a network when physical wiring isn’t an option.

Of course, the previous option didn’t enable the wireless capabilities of
your laptop. To that, we need to add a wireless access point – actually acting
as an access point:

This technique creates what’s called a “repeater” – a bridge connected to an
access point. And, just like the bridges themselves, there are dedicated
wireless devices which are repeaters.

Caveat as you can see this scenario is not necessarily simple, and
it’s not a scenario I’ve actually implemented. In theory it should work.

The more common, and typically more stable approach to extending a network
is to use a wired backbone:

Naturally it relies on being able to run physical wiring to the location of
each access point. When that’s not possible, the bridged approach above is a
reasonable compromise. I tend to favor the wired approach, however, as being
less error prone and easier to maintain. If there’s a way I can run wire and
use only simple access points, that’s typically the direction I’ll design
things myself.

And finally, I do want to point out that these are only examples. Depending
on your own needs, your configuration will probably be different. Switches can
be used instead of hubs, you might have the ability to wire more computers, or
place wireless access points and/or bridges in ways that would be different
than the diagrams I’ve outlined above.

But hopefully I’ve provided some ideas and a starting point.

14 comments on “How do I extend my network wirelessly?”