I am “old” <grin> … so I need to use a magnifying glass to read a lot of the screen words. I suppose that they are in a six or eight-point font. Can I make the screen text larger? Say to a 10- or 12-point font?

The good news is, it’s actually easy to make the fonts bigger, though the setting is often well hidden.

The bad news is, it’s also easy to do the wrong thing and end up with something that seems better, but isn’t.

Changing the screen resolution is the wrong thing to do.

For example, let’s say your display is capable of handling a resolution of 1920×1200. That’s its native resolution, meaning there are physically 1920 dots or pixels across, and 1200 dots up and down on the screen. It’s the resolution at which it works best.

Neither effect is great, and often makes the situation worse instead of better.

In Windows 10, right-click on your desktop and click Display Settings. In the resulting page of the settings app, you’ll find settings not only for the screen resolution — which we’re not going to change — and something called “scaling”.

(In Windows 7, right-click on your desktop and click Screen Resolution. Click Make text and other items larger or smaller for a roughly equivalent setting: DPI.)

This setting changes the size of everything, including text. For comparison, here are 150% (the default/recommended setting for my display) and 250% side by side (click the image for the larger or full-sized version).

If the scaling options aren’t enough, or the results look wrong, click on Advanced scaling settings (directly underneath the scaling drop-down). There are two settings to experiment with.

“Custom scaling” lets you enter a scaling factor that may not have been otherwise available in the recommended dropdown.

As you can see, it’s the same custom dialog used in Windows 7.

And finally, if you make things too big, you may get a warning from Windows that the setting may make some things inaccessible. A great example is if things are scaled so large that a dialog box is too big to fit, so its OK and Cancel buttons aren’t visible. That’s something you’ll simply need to compensate for one way or another — either by going back and reducing the scaling, or by determining if there’s another way to accomplish what you’re attempting to do without having things appear off-screen.

But they will not affect the size of text in other applications, or in  Windows itself. The techniques outlined above are about making everything — regardless of what program you are running — larger (or smaller).

That being said, CTRL+ and CTRL-, (and CTRL with the mouse wheel) are very convenient as long as all you care about is the webpage or email you’re viewing. 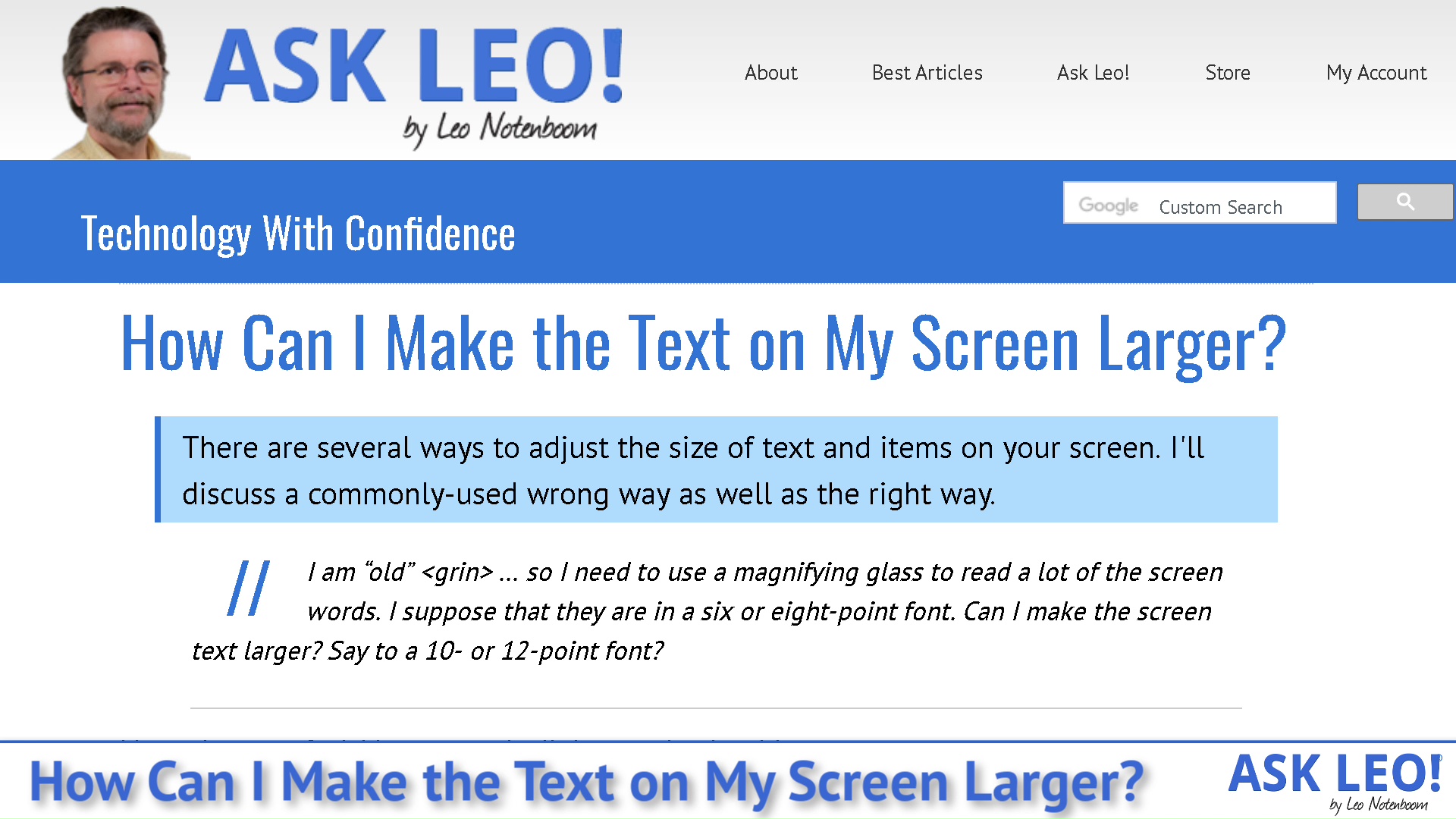 161 comments on “How Can I Make the Text on My Screen Larger?”