Where to place your files and what OneDrive does with them.

I think a good way to answer your question is to review what OneDrive does, how it works, how it relates to the files on your hard disk, and how all that relates to “the cloud”.

Without OneDrive, your files are stored on your computer in the folder(s) you select.

For example, you might have a document — I’ll call it “example.docx” — in your Documents folder. On your hard drive, then, that file would live in the folder:

And its full path would be

Until you back up your machine or make a copy of this file some other way, that’s the only place it lives; it’s the one and only copy of your file.

OneDrive starts with files in a folder on your machine

OneDrive starts out the same way; just in a different folder.

Say you put your example document in your OneDrive folder. On your hard drive, then, that file would live in the folder:

And its full path would be

There’s nothing really different about this. It’s just a file in a folder…

Until you have the OneDrive app running and are signed in to your Microsoft/OneDrive account.

OneDrive automatically copies to the cloud

What that means is that shortly after C:\Users\<login id>\OneDrive\example.docx has been created, you’ll find a copy of the file online in your OneDrive cloud storage at OneDrive.com.2

The file now exists in both places —

— because you placed the file in your OneDrive folder on your machine.

Let’s say you have many files and folders and sub-folders full of documents and more. As long as they’re “underneath” the OneDrive folder on your machine, they’re “in” OneDrive.

All because you placed those files anywhere within your OneDrive folder.

Only files within the OneDrive folder are managed by OneDrive.

What this means is that our original example:

is not within the OneDrive folder, and thus is not affected by and has nothing to do with OneDrive. OneDrive is nowhere in its path.

It’s just a file on your machine, and nothing more.

Now we can get to your answer.

Copying a file to OneDrive

Copying creates a duplicate of the original file.

So if we start with our example:

and copy it to OneDrive:

Then there are now two copies of the file: one within OneDrive, and one not.

Beware: Microsoft can really, and I mean really, set things up so that “Documents” is very confusing. The “Documents” I’m talking about is “C:\Users\<login id>\Documents”. To understand the confusion, see: Why Is My OneDrive Full?

In addition, after the copy is put into the OneDrive folder, OneDrive notices the new file and uploads it to OneDrive.com online.

There are now three copies of the file:

Moving a file to OneDrive

By moving, we are simply changing the location of a file on your hard disk.

Once again starting with our example:

if we move it to OneDrive:

Then there is only one copy of the file on your hard disk: within OneDrive. Moving just changed its location.3

In addition, after the move is made, OneDrive notices the file and uploads it to OneDrive.com online.

There are now two copies of the file:

One feature of OneDrive I’ve not yet talked about is synchronization. It is simply this:

This is one of the reasons I sometimes refer to OneDrive as “nearly continuous backup”. Every time you hit “save” on any document that is stored anywhere in the OneDrive folder on your machine, the saved file is then also uploaded to the cloud.

Perhaps as important in terms of your question, this is not true for any files or folders that are not within your OneDrive folder.

OneDrive has many more features than what I’ve described above, but understanding this fundamental function is enough to begin putting it to use. With that under your belt, you’ll be able to explore what more you can do.

Take a few minutes to understand the basics of OneDrive. Consider using it for at least a minimal amount of near-real-time backup. It’s free and it’s useful. You don’t have to explore or understand its more complex features.

Then, subscribe to Confident Computing for more tips and explanations. Less frustration and more confidence, solutions, answers, and tips in your inbox every week.

Is it a good idea to use OneDrive?

I believe it’s a very good idea to use OneDrive, even at its most basic, as a form of almost real-time backup. As a bonus, the backup is independent of your location, and you can access it from anywhere.

What are the disadvantages of using OneDrive?

There are few disadvantages to using OneDrive. If you have a slow internet connection, it might be slow itself or cause other activities to slow down as it synchronizes files. As long as you maintain basic security on your Microsoft account, there’s really no reason to avoid it.

How do I transfer files to OneDrive?

The easiest way to transfer files to OneDrive is to install or enable OneDrive on your computer and then copy or move files into the OneDrive folder. They’ll be automatically uploaded to the cloud. Alternately, you can visit OneDrive.com on the web, sign in with your Microsoft account, and upload there. 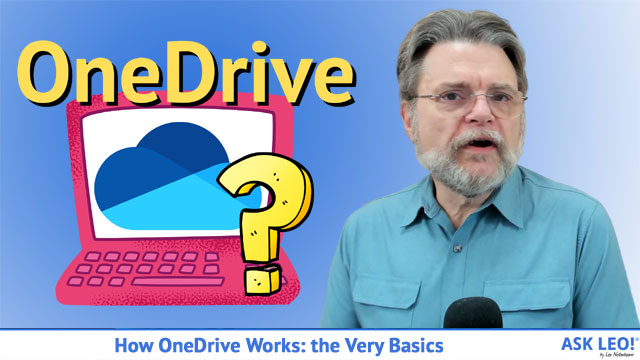 1: This assumes you are connected to the internet.  If not, the upload will happen the next time you connect online.

2: The actual URL in the address bar will change after you go there — currently to a variation of “onedrive.live.com” — but “onedrive.com” is an easy-to-remember starting point.

4: The reverse is also true: if the file changes in the cloud, it’s updated on your machine as well.

14 comments on “How OneDrive Works: the Very Basics”