A checklist, of sorts

Folks often ask what might be broken if their computer does nothing, but provide few clues. It's a long list, and I'll look at some possibilities.

My son has a computer that is not working. It only has a blank screen. Also the light to the hard drive it not on. Is the hard drive broken? Can I get the computer repaired, or do I need to buy another one?

I get so many variations on this question so often that I just have to address it.

In short, that’s nowhere near enough information for me to even guess.

Let me run through a list of some things to check.

If your computer doesn’t work, things to check include:

There are so many things that could be wrong, a technician might be your best solution.

A checklist of sorts

Is it plugged in? The description matches a computer that’s not plugged in at all. I’ve heard from some very embarrassed people when I’ve suggested they check the power plug.

The power supply.  This device, which converts wall power to the internal power used by computer components, could be broken or failing.  It’s usually located inside your computer, right behind the power connection. This is a possibility even if the fan comes on or some lights light up.

The motherboard. All the primary computer components are connected to the motherboard, which could have a problem. It’s rare, but motherboards have many components that are vital to the computer’s operation.

The computer’s RAM could fail, or it could be loose in its socket. With a severe enough memory problem, a computer will typically not boot at all, but lights might come on and fans might run. (An intermittent memory issue is more likely to cause crashes after the computer is running.)

The hard disk could have failed. Typically you’ll at least see some BIOS or UEFI activity, but there are failure modes that result in a very dead-looking machine.

Any expansion card could fail in ways that could cause the entire computer to become inoperable.

The video interface could be dead. If your computer’s doing something, but you simply can’t see it, how do you know if it’s functioning or not?

The video cable could be unplugged or broken. Same idea: if you can’t see it, is it really there?

The monitor itself could be unplugged or broken. Still the same idea. Lights might blink, disks might whir, and your computer might be working … or not.

I could go on.

Hopefully, by now you get the idea. If the computer fails to boot with no clues, no lights, no nothing, or even if the fan does run and some lights blink, but you still see nothing on the screen, it could be anything.

There are so many things that could be wrong, there’s just no way to know, with so little information, exactly what might be broken.

My recommendation is take the computer to a technician who can diagnose where the problem lies.

There are steps you can try yourself to further diagnose the problem, depending on your level of comfort and expertise. Replacing components or removing optional components to see if anything makes a difference is one typical way to start.

After double-checking that you’re plugged in, of course.

Before you ask for help

Whenever you ask for help, gather information to provide to whomever you’re asking. Reviewing What Information Should I Provide When Asking for Help? is a good start, as it covers much of the information that could be valuable to and appreciated by whomever you reach out to.

Typically, those who ask this question without providing details are those who’ll probably be better served by having someone more knowledgeable look at their machine. 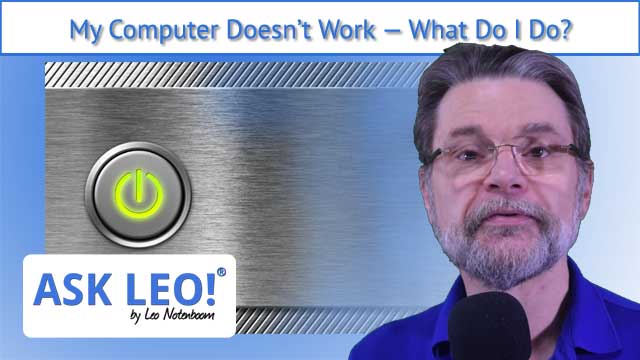