Will my school know if I use Tor at school?

Will they? There’s no way to know. It depends on how closely they’re looking.

TOR, or The Onion Router, is a combination of software and servers that performs two important tasks:

The first point is a particularly important aspect of maintaining privacy or anonymity. It’s not the only aspect, to be sure — you can be identified in other ways, so it’s important to behave appropriately when attempting to maintain anonymity.

Your school as your ISP

In providing your internet access, your school (or employer, or hotel, or wherever you might be) owns the networking equipment to which you connect. That equipment — typically one or more routers of various sorts — can do either or both of two things:

When you connect to TOR, you are connecting to one of several known entry points to the TOR network.

By monitoring the traffic across their network, the school can notice this, and thus see

Now, will they notice?

Big brother, are you watching?

There’s no way to know.

It depends on many factors, including the technical expertise of whoever set up the network, whether they set it up for monitoring, and whether they actively watch for someone using Tor.

My guess is that most school personnel are so overworked to begin with that they don’t bother. At best, I’d guess they’ll probably configure the equipment to try to block your ability to access the Tor network, and leave it at that. Only if they’re informed that something suspicious is going on might they take a more active interest and monitor more closely.

Here’s the catch: you can’t count on that. 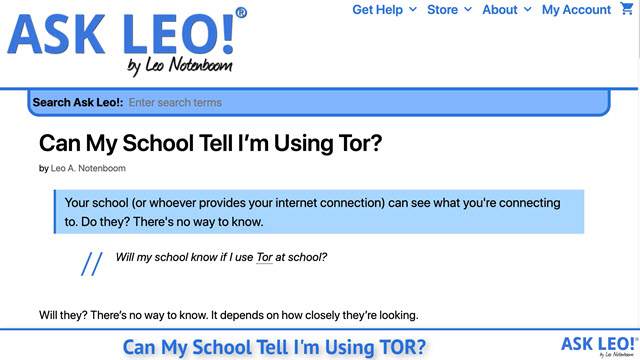 5 comments on “Can My School Tell I’m Using Tor?”