The contents or the container?

Backing up is critical, but exactly how you back up your encrypted container data depends on how secure your backups are.
I’m very confused about VeraCrypt and how I should back it up. Do I back up the files? The container? What if I’m using whole-drive encryption? How do I back up the encrypted stuff?

That’s a conglomerate of several questions I often get about VeraCrypt, TrueCrypt (VeraCrypt’s predecessor), and backing up encrypted drives in general.

Backing up is critical, without a doubt. But when you encrypt sensitive data to protect it, there’s no one answer on exactly how you should back it up. It depends on how you’re backing up already and a couple of decisions you make along the way.

If you keep your data in encrypted containers (such as password-protected zip files or VeraCrypt volumes), it’s important to decide whether you want to back up the container (requiring the software and passphrase to access its contents in the future) or back up the unencrypted contents and secure the backup some other way.

What kind of encryption we’re talking about

First, let’s take whole-disk encryption, such as that offered by BitLocker and VeraCrypt, off the table. They’re actually simpler to back up, with slightly different considerations. You’ll find that covered here: How Should I Back Up an Encrypted Disk?

This article is specifically about encrypted containers. That would include, but not be limited to:

The key distinction here is that there are two ways of looking at what you have.

I’ll use VeraCrypt as my example, but this discussion is true for almost all types of containers and archives.

The most common use of VeraCrypt is to create a “virtual encrypted disk within a file” to hold your encrypted data.

Container files from the outside

A container is just a file on your hard disk. Let’s say this file is “C:\data\mydata.hc” (that’s just my example – your container could be any name and be located anywhere).

In this case, our C: drive holds a file. Its path is C:\data\mydata.hc.

Container files from the inside

If we mount the container file in VeraCrypt (which involves typing in your passphrase and choosing a drive letter), the contents of the container become visible in their unencrypted form and you can work with them normally.

Mounting the container tells Windows to treat it as if its contents were a disk drive. In the example above, we’ve assigned that drive the letter “V:” and provided the passphrase, so the contents of the container are now accessible in their un-encrypted form.

Unmount V: and the data is no longer visible in an unencrypted form. It’s all contained in the encrypted container c:\data\mydata.hc.

You have two options for backing up what you’ve placed in an encrypted container.

1. Back up the container

In the example above, backing up the container means we’d back up c:\data\mydata.hc. In fact, if you create an image backup of drive C:, it will automatically include the file. Some backup programs even require the volume to be unmounted in order to back up.

The benefits to this approach include:

The drawback is that:

That means you’ll need to use the software used to create it in order to access its contents (VeraCrypt in this example).

Back up the container’s contents

This method means you’ll mount your container and back up what appears in the mounted drive — drive V: in my example.

The benefit to this approach:

The drawback to this approach:

If you take this route, you need to secure your backup some other way to keep that data protected.

What’s right for you?

On the other hand, backing up the encrypted container is by definition secure. VeraCrypt and TrueCrypt volumes and Zip files are completely portable and can be opened on any computer running the appropriate software, provided you have the correct passphrase.

Think through your scenario. The two questions to ask are:

Regardless of which technique you use, back up. 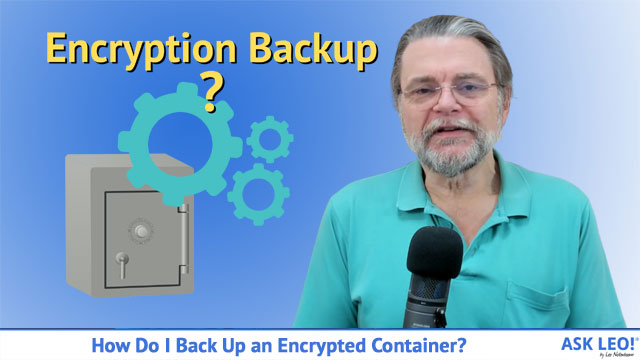 11 comments on “How Do I Back Up an Encrypted Container?”