I back up to an external drive. When I later delete files from my C: drive, will those deletes be removed in future backups on the external drive? I don’t want to restore files that I no longer want.

It depends on the specifics of your backup process, but in general, once you back something up, it remains in the backup file until the backup itself is deleted.

If you delete a file from your hard drive, the file is simply not present in future backups.

You want the file to stay

It’s important that files remain in the backups you create.

For example, one of the things that backups protect you from is an accidental delete. What if you didn’t mean to delete that file from your hard disk? Don’t laugh — it happens all the time. I’d say that backups are used more often to recover accidentally deleted files than for any other purpose.

Even if you intentionally delete the file today, you might change your mind a week, a month, or even a year from now.

My backups have saved me from both these scenarios more times than I can count.

When you don’t want it back

You indicated you don’t want the file to be restored if you’d deleted it.

Exactly how you’ll go about that depends on the specifics of your backup approach.

For example, if you’re taking regular daily image backups1, then you simply need to restore to a backup image taken after you’d deleted the file.

If you don’t have such an image, avoiding that file could be as simple as deleting it again if it shows up.

If you’re using a different backup technique, then exactly what happens may vary. In some cases, the file will not be restored; in other cases, you may need to delete it again.

Many folks are concerned about this for a different reason: they want a deleted file to be deleted everywhere so that others — perhaps law enforcement — can’t recover it.

And, indeed, one of the places from which files are frequently recovered are old backups. The only way to make sure it doesn’t happen is to delete the old backup.

If you can. More on that in a second.

I don’t recommend you do this unless you have a very specific and important reason for wanting to be sure that that file is absolutely no longer recoverable. Otherwise, you’re throwing out a lot of backed up information you may want someday just to get rid of that single file.

If you store a file in a cloud service, they may have taken backups you cannot access.2 If you need a file, they will not recover it for you from their backups, and if you need to ensure that a file has been completely removed, they will not help. And yet, in response to things like court orders, they may be required to recover a file you thought was completely deleted.

Even if you simply email a file to someone, the email may have been backed up by the email service providers while en route. Once again, the same issues apply: you have no access to this backup, thus you cannot recover or remove things from it, while law enforcement (with a court order) may be able to access it.

The rule of thumb is that your old backups usually hold all of the files that were on your machine at the time the backup was taken. That’s kind of the point.

Newer backups will not contain that file. If you don’t want that file restored, make sure you’re restoring a backup that was taken after the file had been deleted, or be prepared to delete it again. 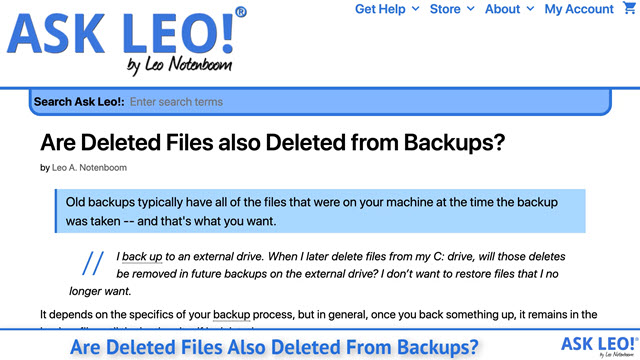 1: In most cases, that means periodic full and more frequent incremental backups.

2: In addition to features like online recycle bins and file history that you are allowed to access.

6 comments on “Are Deleted Files also Deleted from Backups?”