One of the compromises laptop manufacturers had to make to support a full-sized keyboard into the space of a laptop is the numeric keypad most keyboards have. What they’ve done is overlaid it “on top” of the regular alpha numeric keyboard.

The trick, of course, is noticing it, and then turning it on — or in your case, off.

Here’s a shot of my laptop’s keyboard (please ignore the dirt — it’s a well-used and well-traveled, machine).

Down in the lower left, you’ll see the “Fn” key that we’re talking about (though mine’s blue instead of purple).

“
That layout of blue characters mimics the layout of the numeric keypad on a full-sized keyboard. 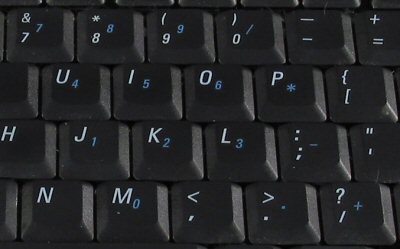 That layout of blue characters mimics the layout of the numeric keypad on a full-sized keyboard.

Which is exactly the opposite of what the questioner is asking; they need to press the “Fn” keys to get the normal (white) characters for each key.

The “problem” is simply that there is a persistent toggle. If you press “Num Lk” (I’ve also seen it labeled “Pad Lk” for numeric Pad) it turns on the blue keys, and inverts the meaning of the “Fn” key — it’s a way to use the embedded numeric keypad without having to hold down the “Fn” key the entire time.

To fix it, just find and press “Num Lk” or “Pad Lk” key again. (Note: sometimes these keys are themselves “Fn” keys, so you may or may not need to also hold down the “Fn” key to get the right function.) Often there is an indicator light associated with the setting.

176 comments on “Why Do I Have to Hold Down the “Fn” Key to Get Normal Letters?”