The setting that’s easy to overlook.

Sharing posts you find on Facebook often results in an "unavailable" message. That's Facebook respecting privacy settings.
Every so often, when I post or share something to Facebook, I get people telling me that they can’t see it or that it says something about being unavailable. I can see it just fine. What’s going on?

Facebook is doing what you — or the personally who originally posted it — told it to do.

And it’s really easy to overlook what you’re telling Facebook to do.

Each post you make has its own visibility setting. Visibility includes public, friends, friends-of-friends, and more. If it’s set to something less than public, then people who are not included will see your post as “unavailable”. The catch is that each new post inherits the previous visibility setting. If you set a post to be visible to only a restricted audience, then the next post you make will default to that same restriction unless you change it. You can change the visibility of posts you’ve already made to restrict access or allow others to see them.

To understand why posts may not be visible to everyone, we need to look at the options available when you create a new Facebook post — specifically what I’ll refer to as visibility settings.

In the example above, when you’re about to make a new post from the desktop version of Facebook, you can set who is allowed to see the post (as well as whether that post should be on your timeline or as part of your “story”). The setting above has defaulted to “Public”, meaning the post is visible to absolutely anyone and everyone.

There’s a wide variety of choices, but the most common is the second: Friends. If this is selected, only your Facebook friends will see this post, and no one else. Those who are not your friends won’t get an error message; they simply won’t see the post.

Important: the default setting for this — Public, Friends, or something else — is whatever you chose for your last post. If you post something only to your friends, your next post will default to that same setting. If you want it to be public, you need to change it back.

In the example above, the post is public, indicated by the globe icon. The most common other icons are the silhouette of two people (indicating the post is shared with a restricted audience), or a gear icon (indicating a more complex sharing rule).

If it’s your post, you can change the visibility by clicking that icon.

You can change the visibility of a post you’ve made pretty much any time.

You cannot change the visibility of the posts of others — and that’s where things get interesting.

Here’s a post made by a friend of mine. They set it to be seen only by their friends; you can tell that by the icon below.

That’s probably not what I intended, since their friends already saw it.2 I wanted to share this with my friends.

Sharing into a group

The most common failure I see is this:

You have two options:

But by far the most common cause is that the original poster placed limitations on who could see it, and your sharing of that post tried to expose it to a larger audience. 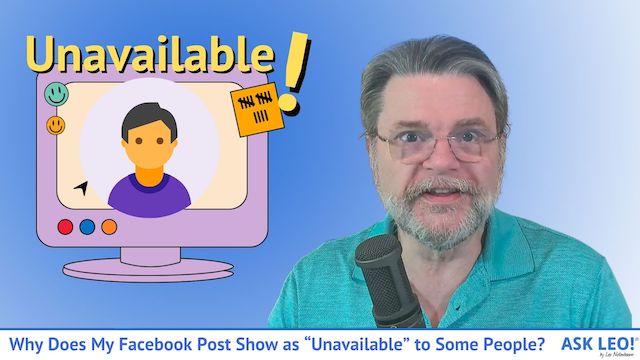 1: That’s not to say they still couldn’t screen-capture it or copy it some other way, though.

2: Not counting the fact that Facebook’s capricious algorithms may not show people everything.