Taking my own advice.

I frequently advise people what to do about unexpected and undesirable software changes. It's time for me to take my own advice.

Over time, we get comfortable with the applications and operating system software we use every day.

What do you do if the change impacts your ability to get things done?

That happened to me, and now it’s time for me to take my own advice.

When faced with an undesired change in software you rely on, start by doing your best to identify the specific problem and see if you can work around it with the tools at hand. Failing that, reach out to the software vendor to see if they know of or have solutions for the issue, and give them a reasonable amount of time to respond. Finally, if all else fails, consider changing to software that more closely meets your needs.

I’ve used Evernote for years. At its heart, it’s a database of “notes” available across all my devices. I keep journals, receipts, article snippets, random notes, even business- and loyalty-card images in my Evernote.

Notes can be placed in notebooks, tagged, searched, and filtered, and you can add reminders, share notes, and much more. It’s surprisingly powerful.

I used a combination of those features as my time management system. It was a variation of the GTD (Get Things Done) system outlined in “How to Build a Productive System with Evernote to Get Things Done“. Worked great. It was flexible and powerful and easy for me to manage.

Evernote went through a major rebuild a year or so ago. The way I understand it, they rebuilt the app to be more consistent across all supported platforms.

I kept using the “old” version while most of that happened. I upgraded a couple of months ago. I expected there would be cosmetic changes, but that its basic functionality would still be there.

To make a long story short, one of the changes was to move the search function to their servers online. Searching my notes for “X” would happen not on my computer, as before, but on Evernote’s servers in the cloud. Underpowered devices had the same search power as any other, and there was only one place Evernote would maintain the search: on their servers.

For reasons unknown, the search could take minutes. Or hours.

Evernote support confirmed it, and I wasn’t the only one complaining. They indicated search speed was being prioritized and addressed in an upcoming version.

In the meantime, I was out of luck.

Filtering my to-do list on a “do today” tag would result in nothing for minutes and often hours. While I was waiting, notes that I’d tagged would not show up, and notes from which I’d removed the tag remained in the list.

Evernote became useless as my time management tool, at least not without some serious redesign of my approach.

I have no doubt it will improve, but over a month later, the problem remains.

Taking my own advice

The advice I often give people is if they don’t like something, consider alternatives. If it’s important, maybe they should consider a change.

It’s important. I considered a change.

I started by trying to replace Evernote completely and build my GTD system in another tool. I reviewed the obvious candidates, like OneNote, Google Keep, Standard Notes, and a few others. All definitely had their pros, but each had some kind of limitation preventing my system from working properly.

My “forehead slap” moment was when I realized I could separate time management from other notes, and considered a dedicated tool to do that.

Once again, there are many to choose from. A few days in, it appears Todoist will win the prize. It’s on all my platforms and seems to handle all my nuances, including arbitrary notes on tasks, reminders, due dates, and fast filtering.

I readily admit some of this is my own doing. I was using Evernote for something it wasn’t really designed for. Fair enough.

On the other hand, regardless of whether you’re building a to-do list or maintaining a random collection of notes and documents, filtering by tag should be pretty darn quick — nearly instantaneous, even.

Having moved my to-do list elsewhere, I continue to use Evernote for everything else I’d been using it for prior. It’s still a powerful note-taking and document-storage utility, and that’s exactly how I’ll continue to use it.

My advice to you

The process I went through is important if you find yourself in similar situations. Specifically:

Please note there’s one thing missing from my list. Many people faced with scenarios like this include “get angry” in every step.

Instead, focus on what you have control over: ability to do your own research, reframe your problem, and be flexible about finding other solutions. 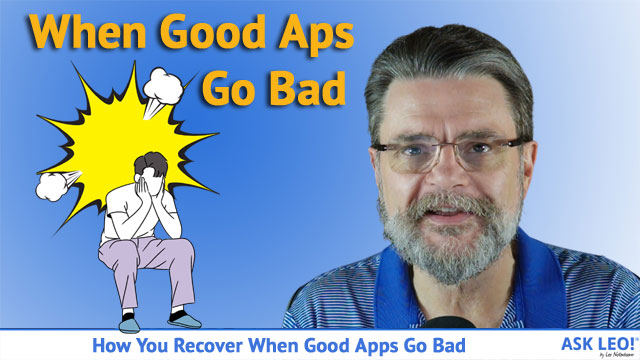 7 comments on “How You Recover When Good Apps Go Bad”