Is Microsoft going to sue everyone? Who knows?

This is Leo Notenboom for askleo.info.

There was a lot of press earlier this week about Microsoft claiming that
various free software, including Linux, violates over 200 different patents
that Microsoft owns.

“I never envisioned my patents as offensive
weapons.”

Will they sue? I don’t know. Supposedly they’re “open to discussions” on
licensing terms, whatever that means. In my opinion the best move Microsoft
could make is to offer anyone in the open source community a license – for a
buck. That way Microsoft would retain its ownership and licensees get to
continue to use the technology in question. Crisis averted, and Microsoft
actually comes out looking looking somewhat benevolent.

It’s unlikely, but I can dream. 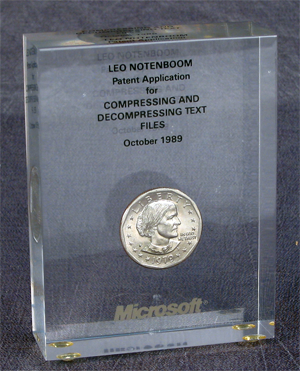 I’m actually the originator of three of Microsoft’s early patents. I’ll list
’em in the show notes for the curious; but I have no idea if any of them are
involved in Microsoft’s current claims.

I often tell people that I lost a lot of respect for the patent process once
my first patent was awarded. To put it bluntly, it seemed too obvious to me. As
a Microsoft employee I assigned ownership and rights to the patent to the
company … for a buck (encased in lucite, so I can never actually use it).

Now, I actually don’t fault Microsoft for filing for patents. Given the
system as it exists they pretty much have to to remain competitive.
Other companies are also amassing large patent portfolios and could just as
easily threaten Microsoft for patent infringement. With a large portfolio of
its own, Microsoft’s response has often simply been a cross-licensing
agreement.

And that points out the patent system’s biggest flaw in my opinion: it’s
nearly impossible for large software development houses not to
inadvertently infringe. Similar problems result in similar solutions. Given
what are apparently exceedingly low standards for patents to be awarded, and a
slow process for doing so, everyone is close to infringing on everyone else.
Hence Microsoft’s “defensive” patent portfolio. When a company comes along and
say “Hey, Microsoft, you’re infringing on our patent”, Microsoft can often turn
around and say “Yeah, well, you’re infringing on one of ours; how ’bout we just
call it even?”

There definitely needs to be some form of protection for intellectual
property, but the current patent system is too slow, and too out of touch with
the actual state of current software development.

As for Microsoft suddenly asserting its patents on the rest of the
community – well, I’ll be very disappointed if it’s true. I never envisioned my
patents as offensive weapons.

I’d love to hear what you think. Visit askleo.info and enter 11503 in the go
to article number box to access the show notes and to leave me a comment. While
you’re there, browse over 1,100 technical questions and answers on the
site.

Till next time, I’m Leo Notenboom, for askleo.info.