I’m running a Gateway GT 4016 computer running XP service pack 2, from the
start button I can push “network connections” and I see 2 network connections.
I have one labeled Nile which I run my 2 machine home network on, the other is
labeled 1394 network adapter. The one labeled Nile, runs at 100 Mbps, the one
labeled 1394, runs that 400 Mbps. The Nile connection seems to be run by nVidia
nforce drivers, and the 1394 connection seems to be run by Microsoft with VIA
OHCI Compliant IEEE 1394 Host Controller drivers. Why do I have a two
connectors and the slowest one seems to be the only one that I can run my home
network on. Is it possible to use the other, faster network?

I have the same connection, and no, I’m not aware of an easy way to use it for
networking. It’s possible, but in practice, that’s not why
it’s there at all.

IEEE 1394 is the industry standard for a an external data connection also
known as “Firewire” (trademarked by Apple), i.Link and a few other marketing
monikers.

They all boil down to the same thing: a high speed external interface for
data transfer.

Since you’re seeing 1394 in your network connections, chances are you have
one or more 1394 ports on your machine. They’re easy to identify by their
distinctively shaped socket. Here’s a picture of the side of my MacBook Pro
that shows the three common interfaces side-by-side: 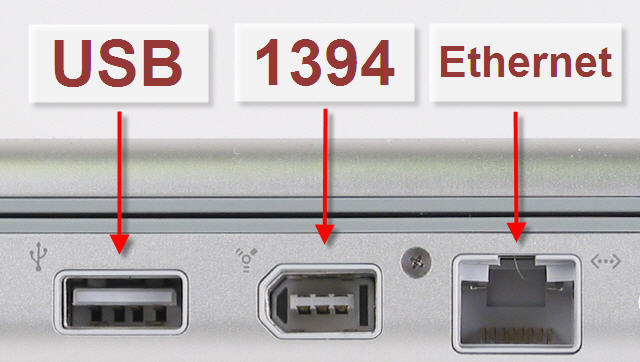 Naturally the placement on your own machine might be quite different.

USB and 1394 are sometimes considered “rival” interfaces, since they do many
of the same things. 1394 has a slight advantage in popularity for streaming
media – if your video camera has a digital interface, chances are it’s 1394.
USB has an advantage for random peripherals like mice, keyboards and the ever
popular USB FlashDrive. And both 1394 and USB are often used for external hard
disk drives.

“Since you’re seeing 1394 in your network connections,
chances are you have one or more 1394 ports on your machine.”

So why does 1394 show up as a networking interface?

It is possible to use a 1394 interface for limited networking. You can, for
example, use 1394 to create machine-to-machine network. Naturally, both
machines must have the 1394 hardware interface and the appropriate 1394 cable
must be used to connect them. Much like networking with a single ethernet
cable, I’d expect additional protocols might be required, or additional
configuration steps needed in the TCP/IP configuration (since IP addresses
would have to be assigned manually.)

But, in all honesty, that’s not what 1394 was really designed for. While it
might be possible, I wouldn’t recommend it, as you won’t find a lot of how-to
information.

And you certainly cannot use your IEEE 1394 interface to connect to an
existing ethernet based network. At least, not without some kind of adapter
hardware, and I’m not sure that hardware even exists.

And lastly, rumor has it that 1394 networking ability has been removed from
Windows Vista.

My recommendation is to use the interfaces for what they’re best at and most
commonly used for: USB for peripherals, 1394 for video cameras and perhaps
external hard drives, and ethernet for networking. You’ll get the best results,
and the best support for your efforts, by following those common paths.