A screen shot, screenshot, or screen capture is a way to “take a picture” of your computer screen (or a portion thereof).

Why would you want to do that?

Well, let’s say you’re trying to explain a computer problem to a technical friend of yours, and you’re trying to describe what you see on the screen — the dialogs, buttons, messages, whatever. You’re not sure of the terms to use, and your friend is having a difficult time understanding your description.

And of course, your friend insists that the exact wording of everything you see is incredibly important (for the record, he’s right.)

You know what they say: “A picture is worth a thousand words.” And it can go a long way to eliminating miscommunication.

Let’s take a picture of your screen you can email to your friend.

The Windows utility that allows us to take screenshots is called the “Snipping Tool”.

Click on the Start button and start typing “snip”. One of the first search results will be the Snipping Tool. Click on Snipping Tool to run it.

Next, click on New to begin the Snip. The screen dims until I click on the window I want to capture. The Snipping Tool takes the picture and opens that picture up in its editor.

In the editor, you can make annotations and mark-ups to the image before saving it to your hard disk as an image file. The Snipping Tool supports many different image formats, but .png or .jpg are probably the most common formats used for simple screenshots.

Much like Windows 10, at the tiled desktop, just start typing “snip” to begin a search:

The Snipping Tool will likely be the only result.

Windows Vista and Windows 7 also include the Snipping Tool. You’ll find it on the Start menu, in All Programs, Accessories: 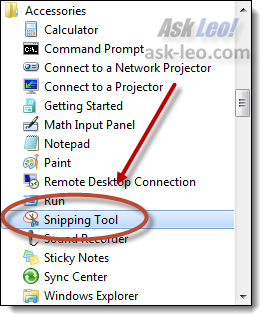 The Snipping Tool doesn’t exist in Windows XP, but …

Ever wonder what the PrtScn key on your keyboard is for? A long time ago, it did what you might think: push it, and your printer printed an image of whatever was on your screen.

Today, however, when you press PrtScn, an image of your entire screen is placed on your clipboard. Now, rather than printing it, you can do something with it.

First, we need to place it in a file. After you’ve pressed PrtScn, fire up your favorite image editor, or use the Paint program that comes with Windows XP (by pressing Start, All Programs, Accessories, and then Paint).

Now in Paint (or your equivalent), hit Edit, Paste, and you should now have an image of your screen within the image editing program. 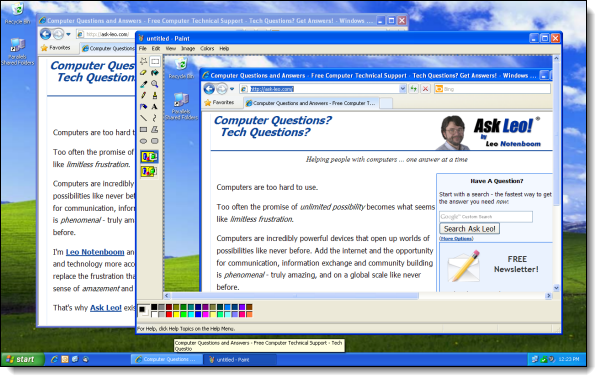 Now, save this image to a file. Typically, that includes clicking File, Save As… and selecting either a .jpg or .png file format.

A couple of additional notes:

The PrtScn technique works in all versions of Windows, but the Snipping tool is more convenient.

Macintoshes have screen-shot capability as well. Check out How to take a screenshot out at Mac Help For Mom.

By default, I don’t allow attachments to be submitted with questions. This is mostly for my safety, as someone could easily attach malware.

However, screenshots can be a very helpful resource when diagnosing problems. Should the need arise, we’ll make arrangements to get one to me.

The Snipping tool, or the paste-into-Paint method, provides a basic, yet powerful, approach to getting screen captures. They’re free, and included with every copy of Windows. Of course, if you have Windows Vista or later, the Snipping Tool is very useful.

I use something else.

When run, Snagit replaces the PrtScn functionality with its own. It allows for full screen, partial screen, and even full scrolling-window capture, along with a number of capture-time options. It also comes with a fairly powerful image editor that allows me to quickly add call-outs, arrows, and the fancy “torn edge” effect I use in many of my screenshots, including a couple of those shown above.

Most folks don’t need an additional screen capture utility, particularly if your version of Windows includes the Snipping Tool.

That being said, if you take screenshots regularly (as I do), a more powerful tool with more options both in capture and annotation might well be a valuable addition, and Snagit is an excellent choice.

A picture is worth…

Hopefully, you can see the value of screenshots by now.

You’re presented with a complex situation or a huge, long error message that you don’t want to re-type, and just wish you could show someone.

Run the Snipping Tool or press PrtScn, and you’re on your way to creating an image of the screen, with everything exactly as you see it.

82 comments on “What’s a Screen Shot and How Do I Make One?”