Can you explain bandwidth to me in layman’s terms? I have looked it up on the internet, but I get the standard mathematical explanation. My brain doesn’t really work mathematically so I need something a little more tangible, or some examples of what is FAST and what is SLOW.

I’m going to bring out the oldest metaphor I have to try and put a handle on how fast is fast. No math (ok, not much), but first just a teeny, tiny bit of computerese.

And, of all things, radio.

I know: not very helpful.

More information — and in this case, greater fidelity — can be transmitted on a wider band. While AM radio has a bandwidth of approximately 20 KHz, and FM radio might be at 150KHz, analog television frequencies were allocated up to 6MHz to handle the additional information required for both video and audio signals.

Almost none of that applies to the way we use the term “bandwidth” when it comes to computing, except for the concept that greater bandwidth allows more information to be transmitted.

When it comes to our use here, bandwidth is simply the speed at which data is transferred, or more commonly, the maximum speed or capacity of a data connection. Speed is usually measured in bits per second.

One bit, eight bits, and text

You probably know that a bit is a single “thing” that can be either 0 or 1. Nothing more, nothing less.

Everything in your computer, every document you read or write, every song you stream, every movie you watch on your digital TV, everything you communicate on the internet is nothing more than a collection of bits. Everything.

The bit is the very definition of digital.

Bits are commonly handled in groups of eight, called bytes. If you look at eight bits whose possible values are either 0 or 1 each, the collection can have up to 256 possible unique combinations.

Text on a computer — such as you’re reading here — is commonly represented as a single byte per character2. So if I type, “The quick brown fox jumped over the lazy dog,” (which is 44 characters, including spaces) it takes 44 bytes to store all the characters.

Now we’re ready to break out our metaphor: the Bible.

The Bible as a unit of bandwidth

This has nothing to do with the contents of the Bible. Believe in it or not as you see fit. This is about its size. You’ve probably seen one, perhaps even own one, and have a good sense for how big it feels, how hefty it is, and how long it might take to read it cover to cover.

The Bible is a fairly sizeable common frame of reference.

Let’s compare some common bandwidth figures and see how long it would take to transfer The Bible at each of those rates.

These are all approximations, meant only to be examples of orders of magnitude.

Your speed will almost certainly vary. These numbers assume you have 100% of your connection available to you (which is not true, due to overhead and potential connection sharing), and that the download is the only thing happening on the connection.

Typically, if you’re getting within 80-90% of these numbers, life is pretty good.

Naturally, we don’t all go around downloading Bibles all day. Particularly if you’re on a fast connection, the difference between, say, 0.4 and 0.04 seconds might not be noticeable.

The best way to test your speed is by using one of several different speed test sites.

Each reports the speed of your connection in some multiple of bits per second.

Remember that any other device using your internet connection while you run the test will impact your results. The results — approximate to begin with — will be even more so if you have lots of other devices online.

Back to The Bible

100 million bits per second is a pretty abstract concept.

That this is the equivalent of downloading 150 copies of The Bible in one minute hopefully makes it more real. 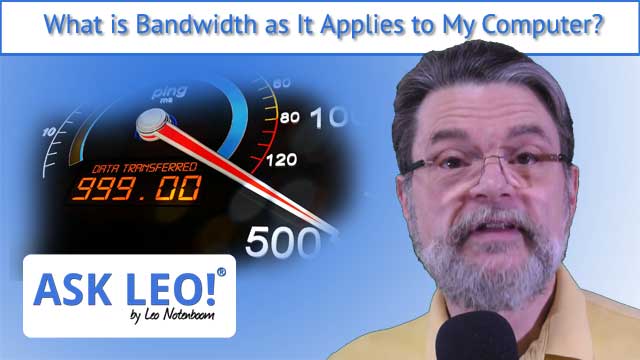 1: All of this is over-simplified for clarity. While there are many (many) details that pedants might want to see included, they’re generally not useful to address the question at hand.

2: There’s also now Unicode, which includes two-byte and even four-byte character representation for the thousands upon thousands of characters and symbols used internationally.

8 comments on “What is Bandwidth as It Applies to My Computer?”