This is why I go digital at every opportunity.

For years, I’ve had a collection of 8mm and Super-8 movies stored in my basement. As technology has progressed and the projector deteriorated, I realized that the only way I would ever see them would be to get them converted to a digital format.

That involved shipping them across the country. If that makes you nervous, it absolutely should. It did me.

Because this was so important, I researched the most promising services for digital movie transfers. I settled on Cinepost.

I’m glad I did. Not only are the transfers of high quality, but they did a great job keeping me posted, responding to my requests, and just being there for me. That last item, and one more thing, are important for reasons that will become apparent below.

To be extra clear: I would happily use Cinepost again, and highly recommend them to anyone considering something similar.1

I ended up sending a selection of my movies in three waves, though it was originally intended to be only two.

First, I sent in three movies — two older 8mm films of me as a small child and one Super-8 — to test the process. You can see the results of the 8mm transfer on my personal blog post, Little Leo. These were the most important films to me to preserve in some fashion.

While it was a little risky to send these in as part of a “trial run”, the results exceeded my expectations. The original films were returned, along with the digital copies on a USB hard drive.

Once I saw the results, I went all in, boxed up the remaining 26 reels (2,000 feet) of Super-8 film, and sent it off for conversion. This time, the hard disk was returned separately, so I could review the results before the originals made their way back to me, in case anything needed to be redone. The results were once again perfect.

Of course, as I was reviewing the results of the larger batch of movies, I discovered I’d overlooked four more. I sent those in and told the folks at Cinepost they could just send everything back once these final four had been converted.

That’s when thing got interesting.

While traveling, I received email notification from the shipping company2 that the package, which required a signature, had been delivered to my home. My wife hadn’t signed for anything and knew nothing about it.

When I returned home, the package was nowhere to be seen.

At this point, I had the conversions of all but those last four films. They were lost, and since they’d been shipped back together, both their digital and original forms were lost.

Let me say that again: they were lost.

But then I remembered something the folks at Cinepost had mentioned.

Backups to the rescue

The digital conversions remain on their equipment for some period of time after being returned to the customer.

Put another way, they kept a backup. The movies were not “in only one place”, they were in two: the lost package, and at least one machine across the country from me at Cinepost.

We made arrangements to begin transferring those files via the internet. They were large, so they took some time to upload, but they existed.

These movies were films I didn’t even realize existed. They were films of me and our first dog, a Newfoundland named Elsie, taken not long after my wife and I were married. As you can imagine, they were incredibly touching for me to see.

Now that the digital copies were once again in my control, they fell into my own backup strategy. In short, that means:

All of that happened automatically, of course, within a few days of the digital copies arriving here.

Even if I never got my originals back, I had the digital copies, and they were backed up.

This is why I love digital and backing up

That’s worth repeating. Even if the originals were lost forever:

To be completely honest, I’m not sure if the originals will ever see the light of day again. There’s no need.

But this is why I love digital information and digital conversion (or copying, if you like) of analog or pre-digital media: it opens so many possibilities. Not only can I share what I have (as in my post), but I can back it up. I’m no longer reliant on one and only one copy of the movies in a format that has a finite lifespan and can be difficult to access.

What do you have lying around?

What are you at risk of losing because you have only a single copy?

What are you at risk of never being able to access again because media standards continue to evolve? (Who has a 8mm projector these days?)

What are you at risk of losing because it’s the only copy, and the mere act of viewing it causes it wear and quite possibly literally tear?

What else don’t you have backed up?

Postscript: the kindness of strangers

I’d begun the lost-package tracking process with Cinepost and the delivery service to see if we could track down what happened to the originals.

Two days ago, there was a knock at my door. A stranger, holding a package.

The package had inexplicably been delivered to an address three miles away. Coincidentally, this person had also been out of town, and his neighbor had taken delivery and signed for the package without looking at it closely. Once the package had been opened, of course, it was clear it had been misdelivered.

He took the time to deliver it to the correct address.

Sadly, being so surprised, I didn’t think to get his name — but I’m very, very grateful. 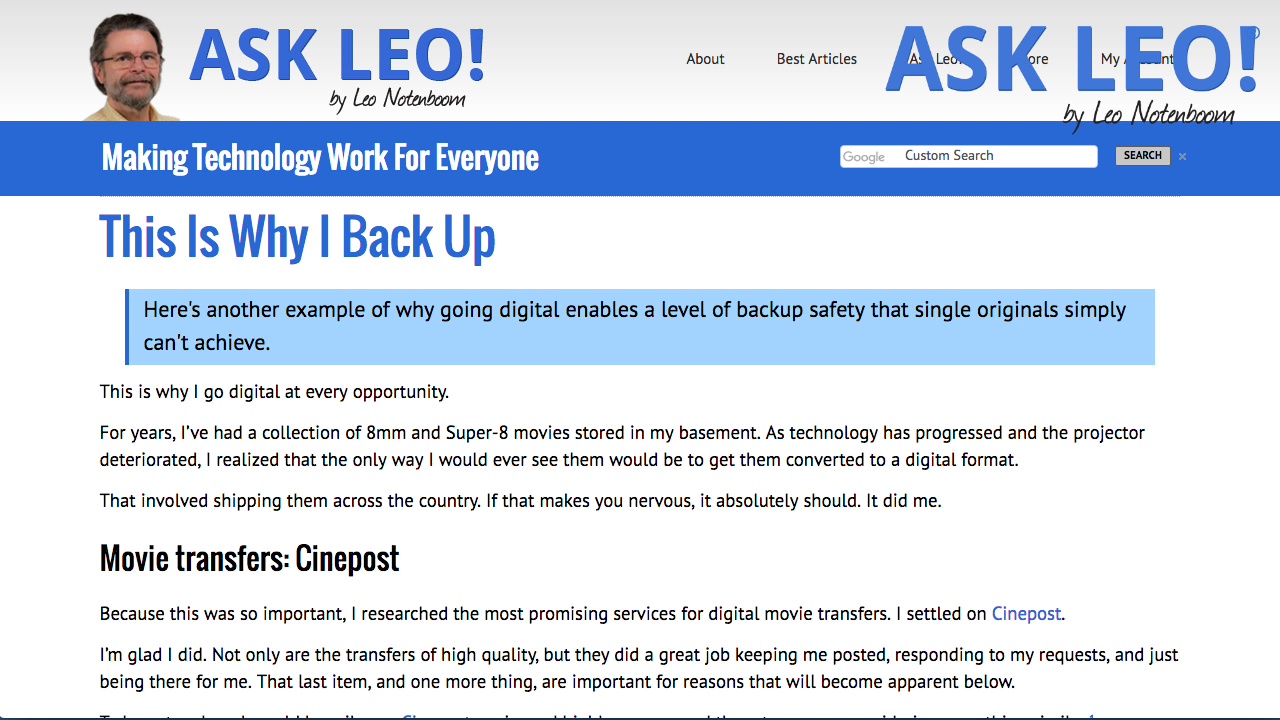 1: As I write this, this is not a compensated recommendation. I get nothing for mentioning them. I’m simply a happy customer.

6 comments on “This Is Why I Back Up”