During my recent two-month sabbatical, I took the opportunity to do a few
things that I’d been putting off.

One of those things was to upgrade my main machine – a nearly five-year-old,
quad-core desktop with eight gigabytes of RAM – to Windows 8. Not a dual boot. Not
a “try it in a virtual machine.” No, this was a commitment. I did this with the
intent to completely commit to Windows 8 moving forward and suffer through whatever it is that I’d been hearing of from people for the previous few months.

I was deeply disappointed.

Not by Windows 8. With only a couple of exceptions, it’s been great.

Instead, I’m disappointed by all of the wailing and gnashing of teeth that I’ve
been hearing from readers and in the tech press.

I can hear heads exploding already. Let me explain.

Disregarding my own advice

I started my process by completely disregarding what I’ve long held as a
standard piece1 of advice
when moving from one version of Windows to another: do a clean install.

I did an actual in-place upgrade of the Windows 7 Pro. Yep, I totally
understand that reformatting and starting from scratch is a royal pain. I’m
probably worse than most in having lots and lots of different applications and
utilities and other what-nots installed and customized on my machine –
especially the one that I use every day. I didn’t relish the thought of having
to reinstall and reconfigure everything again.

I also wanted to tempt fate. In a sense, I wanted to experience the worse-case scenario so that I could see just how bad it might be and hopefully gain a better understanding of why people were complaining.

It was not to be.

In fact, it was one of the smoothest upgrades that I’d ever done. After the
upgrade, my machine rebooted and I was looking at a Windows 8 that looked
amazingly like the Windows 7 that preceded it.

What tends to freak people out the most about Windows 8 is the tiled Start
screen. My machine bypasses that on boot and lands directly on the
desktop. 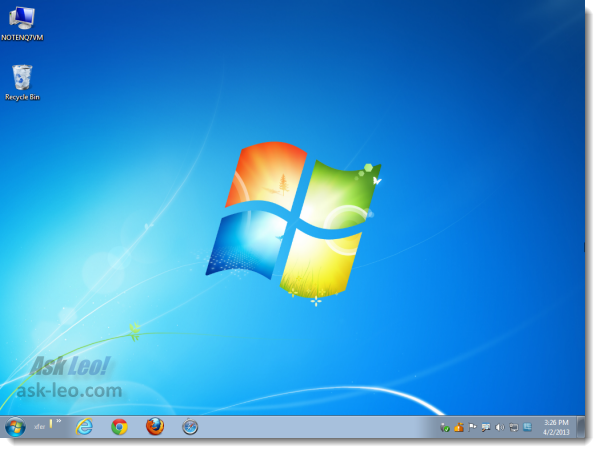 And here’s what a Windows 8 desktop looks like as I have it running: 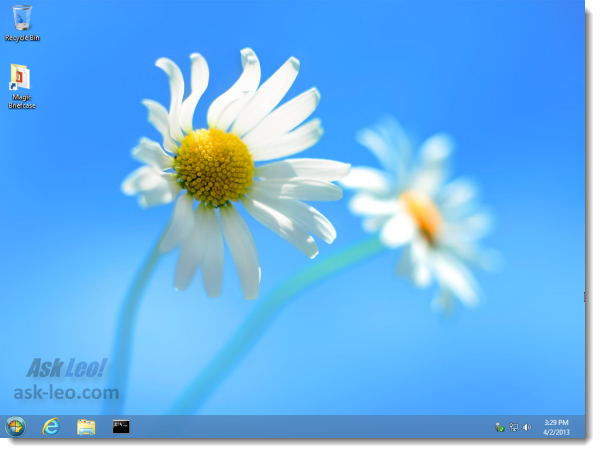 (Full disclosure: That’s not my actual desktop, but a virtual machine
configured the same way.)

They look pretty similar, don’t they? All I did is install exactly one free program that I’ve
discussed before:
Classic Shell.

Now, you can argue all day about whether Microsoft should have made a
traditional Start menu an option in Windows 8 or not, but the fact is that they
did not. As a result, Classic Shell (and several other similar programs) solve
the problem quickly and for free.

In my case, I had already installed Classic Shell in Windows 7 as part of my
earlier evaluation and elected to leave it there. Like almost everything else
on the machine, it survived the upgrade and worked. The tiled Start screen
appeared for a moment and then was replaced by a very familiar desktop,
complete with my prior customizations.

That’s not to say that there weren’t any issues. Here’s what I did
encounter:

After close to two months of normal usage, that’s honestly it. Everything
else, including all of my other “major” applications like Microsoft Office,
Photoshop, even World of Warcraft, worked fine.

Heck, a few things surprised me by just working! For example, the keyboard
macro software that I use,
Auto Hotkey, Classic Shell (as I mentioned above), and my system’s
sound support2 which is
often a cause of problems for folks. 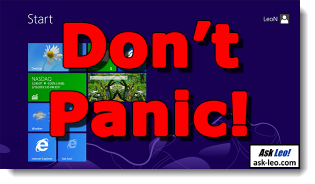 With a fair amount of Windows 8 experience under my belt, the recommendation
I’ve been making for some time doesn’t actually change much:

I’ll have more on it in a future article, but if you’re using Windows 8 on a traditional desktop or laptop, I also recommend that you avoid using the apps that are part of the tiled Start screen as much as possible. Instead, use the ones that you find on your traditional desktop. There are a few gotchas
– for example, the tiled Internet Explorer isn’t quite the same as the Internet
Explorer launched from the desktop (ditto for Skype, Kindle Reader, and
probably several others). Unless you’re actually on a tablet – and perhaps even
a smaller one at that – the desktop applications are probably preferable and
less confusing when making the transition.

Bottom line: I just don’t get it

So with all that being my experience so far, I have to say: I just don’t get
it.

I just don’t understand the Windows 8 haters. The single biggest objection –
the tiled Start menu – is so easily dealt with that I have a hard time
understanding where all the vitriol comes from… although I fully expect folks
to try to educate me in the comments below

1: One piece of advice that I did follow was to perform a full
image backup before the upgrade. You just never know. If the worst
happened, I could relatively quickly reset my machine to its un-upgraded
state.

2: Doubly surprising because this isn’t a national name brand machine, but
rather one from a local vendor.