Help! My Shift key is stuck!

Have you ever gotten so frustrated with your computer that you just start randomly pounding on the keyboard… or perhaps a particular key?

That is often the source of the problem. No, Windows isn’t “getting even” with you, though it might seem that way. It thinks you’ve asked it to do something.

Sticky Keys, Filter Keys, and Toggle Keys are Windows features that modify keyboard behavior. They all have corresponding shortcut sequences to turn on — which can be done accidentally. You can disable this possibility by changing the corresponding “Allow the shortcut key” options in the Settings app.

Windows includes what are known as “accessibility options” — also referred to as “ease of access” settings — designed to make the computer more usable by those with various physical challenges.

Several of those options relate to the keyboard, and are fairly easily enabled.

For example, hitting the Shift key five times in a row.

Sticky Keys is enabled in two ways: in the settings app, or by pressing and releasing the Shift key five times in a row.

Let’s say you’re frustrated with your computer and start hitting the Shift key (or in my case, alternately pounding on both Shift keys). When the Shift key is pressed five times in a row, Windows assumes you’re asking for Sticky Keys. Windows does present a confirmation dialog, but that’s easy to miss if you’re still pounding your keys and happen to hit Return.

Maybe you’re not that violent. Perhaps you’re just lost in thought as your finger slowly descends on the Shift key. Eight seconds later, Windows thinks you’ve asked for something called “Filter Keys”. Filter Keys is a way to ignore brief or accidentally-repeated keystrokes.

If you’ve held down the Num Lock key for five seconds, Windows will ask you about something called “Toggle Keys”, which beeps a tone whenever you press Caps Lock, Scroll Lock, or Num Lock.

To be fair, Windows does ask before turning on these features, but if you hit Return by mistake and the feature gets turned on, it can be frustrating to try to get anything done if you don’t realize what happened.

Which, of course, can lead to more keyboard-pounding.

In the Settings app, search for “ease of access” and click on Ease of Access keyboard settings when it appears. (In prior versions of Windows, look in Control Panel, Accessibility Options).

Here you can turn off (or on, if you like) each of the three features: Sticky Keys, Toggle Keys, and Filter keys.

More importantly, though, each feature has a corresponding checkbox (checked by default), controlling whether or not the corresponding shortcut key sequence is enabled.

Uncheck “Allow the shortcut key to start Sticky Keys” setting, and you can pound the Shift key all you like without effect.

At least until the keyboard breaks. 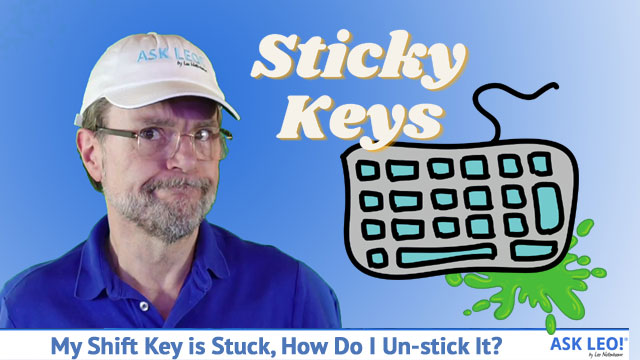