Common when switching to an SSD, it’s not hard, but takes a little planning

Restoring to a smaller drive is often difficult. I'll list the steps necessary to get the job done.
Hi, Leo, I recently broke my hard drive. A 750 GB drive. I made a full system image using the Windows backup utility. The data on the drive was about 150 GB. I would like to recover the image to an SSD drive 250 GB, but Windows says that the target drive is too small. Is there any way to do this?

The scenario is very common, even without a hard disk failure: simply replacing a traditional hard disk with a newer SSD is likely to involve “downsizing” the drive, as SSDs are generally smaller than HDs at comparable prices.

Restoring backup images across differently-sized drives has become easier since this question was originally asked. Unfortunately, Windows built-in backup utility hasn’t improved in this regard.

Clean up, uninstall, or move things around to first make sure the amount of data on your old drive fits in the space offered by the new drive. Create a backup image of the old drive, then restore it to the new one. Most backup programs will do the right thing when performing a restore and make everything fit. If that won’t work you might need to resize the partition on the old drive to something smaller than the new before creating the image. Third-party backup or partition management tools might be required.

The data needs to fit.

In the question, only 150GB of data was on that 750GB drive, so moving that data to a smaller 250GB SSD should be relatively easy.

For most people, though, the first problem is that the original drive is filled to the brim, and the data that would simply need to be transferred exceeds the capacity of the replacement drive. In cases like that, a few more steps may be necessary:

Once you have the amount of data to be transferred down to something less than the capacity of the new drive, you’re at a point where you can start.

Some backup programs will “do the right thing” when restoring an existing image, as long as the amount of data on the image is less than the size of the new drive. In the original question, while the image was of a 750GB drive, there was only 150GB of data on the drive.

Some programs restore that to a new drive as expected: they’ll set up partitions on the new drive to the largest available, and then restore the data, as long as it fits.

Windows Backup is not one of those programs. You’ll need to do something different.

Restoring when you can’t

The real problem here is that the failure has already happened, and the original disk is no longer available. We need to restore the backup image if we’re going to restore at all, and Windows Backup isn’t going to help.

It’s a bit of a pain, but in theory it should work.

Preparation, if you can

If you’re not dealing with a drive failure, but still have the original working drive, I’d follow the same or similar steps without getting a replacement drive.

That only works, of course, if the drive hasn’t yet failed and you’re replacing it for other reasons.

Besides Microsoft warning us that they plan to stop supporting it, Windows’ built-in backup program is just too limited in too many ways to be a reliable tool for scenarios like this. I recommend you stop relying on it.

Instead, get a copy of Macrium Reflect or EaseUS Todo and use either to do your regular backups. Both are more flexible, more forgiving, and have better support than Windows Backup. 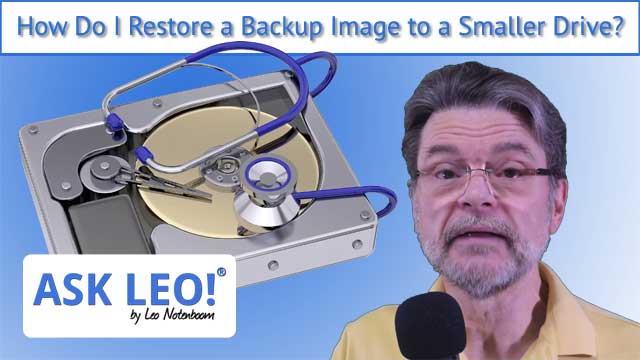 4 comments on “How Do I Restore a Backup Image to a Smaller Drive?”