It would make some things easier.

In general, the answer is no, it will not work. But sometimes it does. And sometimes it’s something in between.

It depends on how similar the two machines are.

Let’s just say it’s something I would not trust.

Can I move my hard drive?

Since Windows Setup configures Windows to the specific hardware on your machine, moving a hard disk from one machine to another and expecting Windows to work is risky. Windows will try to update itself in the face of what it sees as a massive change, but the results are not guaranteed. Your best approach with a new machine is to reinstall Windows from scratch and allow Windows Setup to do its job properly.

Setup configures Windows to the hardware

When you install Windows, the setup process configures Windows to the specific hardware configuration of that machine.

It installs the drivers and other software appropriate to the specific network card, audio hardware, hard disk interface, optical drive, and so on installed in the machine. This includes drivers and settings for things you don’t normally think of, like motherboard chipsets, CPUs, USB interfaces and hubs, and other low-level components.

When you add new hardware, Windows notices, and either installs or prompts you for new drivers, with no or little action needed on your part.

The same is true when changing hardware. If you remove one graphic card and replace it with another, Windows treats that as new hardware and fetches the appropriate drivers.

It’s very convenient and works well when you’re adding or change one or two things.

Everything changes when you move a hard drive

However, when you move a system drive from one machine to another, to Windows it looks like everything has changed on that hard drive.1

EVERYTHING: the motherboard, the chipsets, the display, the audio . . . everything. And it’s right: it’s like you swapped every piece of hardware on the machine for something else.

Windows will try. It’ll try really hard to update itself in the face of this onslaught of changes.

Whether it’ll succeed is the question. And as with so many things, it depends.

Similar hardware has the best chance

If the machine you take your hard disk to is identical to the original machine, you stand a pretty good chance of having everything work.

You might have to deal with Windows activation, since it incorporates things like serial numbers to detect hardware changes, but that often just works or can be handled with a phone call.

You might still have issues with hardware that’s very different from the original machine. That too may just work, or may require extra steps in the form of manual driver installation.

If the new machine is dramatically different, I would not expect this to work.

I can’t point to a specific thing and say, “This will break it.” A different CPU? Maybe, maybe not. A different disk controller? Perhaps. Different amounts of RAM? Probably not an issue.

It’s difficult to say, but the more different the two machines are, the less I would expect it to work.

I also can’t tell you exactly how it’ll fail.

Failing hard, failing later, or failing not at all

How badly will it fail? In the worst case, things are so different that Windows simply can’t recover and won’t complete booting. The results are clear: it doesn’t work. You’ll need to install Windows from scratch to allow it to configure itself properly.

Your machine may initially appear to work but develop problems later. Or you may not realize that things aren’t working properly until you use a connected device for the first time. Or Windows updates might not work.

The list of things that can go wrong is lengthy. The probability for each? Completely unknown.

And of course, your machine could just run with no problem at all. There’s just no guarantee.

One compromise is to install the system disk of an old machine as a second disk in a new machine. This makes transferring your data easy. See: Can I Move My Old Computer’s Hard Drive to My New Computer to Transfer Data?

It’s not worth the risk

I would never rely on this approach to work.

There are too many pitfalls, too many ways that things could go wrong, and no way to know with any certainty which problems you’ll encounter, if any. I’d expect the result to be “half-baked” and prone to hardware issues.

The safest approach by far is to reinstall Windows from scratch. This will give Windows Setup a chance to do its job and properly configure Windows to the hardware you have.

Before you do anything — moving the hard disk or installing from scratch — back up the existing hard disk. That way you’ll always have the information stored on it should you ever need it.

Then subscribe to Confident Computing for more tips on how to accomplish your upgrades and changes with fewer hiccups! Less frustration and more confidence, solutions, answers, and tips in your inbox every week.

Can I take my hard drive and put it in another computer?

You can definitely take an old hard drive out of one computer and place it in another, as long as the destination computer has space and the proper interfaces. The best approach is to install it as a second drive so as to be able to easily access its existing contents. If you don’t care about the contents, you can also use it as a replacement drive and install a new OS from scratch.

How to move Windows 10 to another hard drive

If you are simply replacing an existing hard drive, perhaps due to failure, you can restore Windows 10 and all your programs and files from a recent image backup of the original drive. If you’re attempting to literally move it to a different hard drive — either an additional drive or a drive on a different machine — the only way to really do that is to reinstall Windows 10 from scratch on the new drive.

How to use hard drive from another computer

One of the easiest ways to use a hard drive from another, perhaps older, computer is to remove it from the machine and place it into an external USB drive enclosure. All the data on the drive is preserved, and it can be connected to any computer with a USB port. 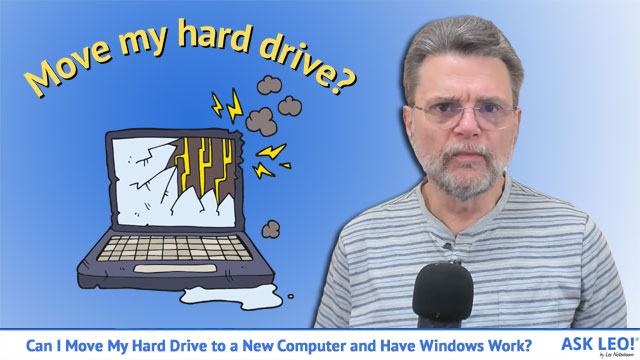 1: Well, except the hard drive itself, I suppose.

36 comments on “Can I Move My Hard Drive to a New Computer and Have Windows Work?”