I love Steve Gibson, and his firewall testing utility Shields Up, I
really do. Unfortunately, Steve’s taken a rather extreme position in how
he reports your firewall’s status – anything less that total
invisibility is labeled with a big red “FAILED“.

In my opinion that’s both impractical, and unnecessarily alarming
for the average user.

But the test itself, which I FAILED right here at home, returns some
very valuable information nonetheless.

To “turn off” a port without a firewall requires turning off all software on your machine that might be listening on that port. The fact that you don’t run a web server on your desktop means that your computer is already not listening on port 80, because there’s no software to do so. Unfortunately, for many other ports, this solution isn’t always practical.

Enter the firewall. It sits between your computer and the internet, and controls all incoming requests. When a firewall sees an incoming request, it can take any of several different actions:

That last one is the most secure, because not responding is exactly the same as if there were no computer here at all. The remote computer doesn’t get any confirmation that your computer even exists.

ShieldsUp refers to this as “Stealth”.

Unfortunately, ShieldsUp also considers anything less than stealth on any port as a failure. 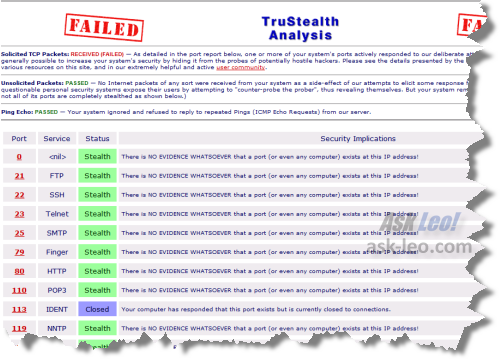 As you can see I “Fail” the Shields Up test. If you were to look no further, you’d probably panic and not know what to do.

In my case, I do nothing. I’m totally safe. The “failure” is that my router responds to a ping request by saying “this port is closed”. You actually can’t ping my IP address, but you can determine that my IP address exists.

From a very practical standpoint, my reaction is: so what?

I don’t consider this a practical failure, and it’s certainly not a hole in my firewall or any kind of serious security flaw. In fact it’s exceptionally common, as there have been problems reported with some systems that successfully stealth this port – so they may want it to be discoverable.

Port/firewall testers are incredibly valuable, but depending on how they display their results they can also be somewhat misleading. Take the time to understand the result you get before you panic.

And yes, use a firewall of some sort.

13 comments on “I can&apos;t pass a firewall test, what should I do?”