Rebooting your computer "every so often" is less necessary these days than it once was, but the point is often moot.
I have Windows 10. I leave my computer on all the time. How often should I re-boot my computer, or does it really matter?

Seriously, it’s not supposed to matter.

But of course, I find that often it does.

Let’s look at some scenarios and my rule of thumb.

There’s no real rule for how often to reboot your computer if you leave it on all the time. Software updates often force the issue by needing a reboot. System instability or odd behavior is one symptom that might warrant a reboot. Without those, though, there’s rarely a need.

The rule is: there is no rule

There’s no hard-and-fast rule; it really depends on how you use your computer.

If you spend your entire day running only one program, there may not be a need to reboot it periodically at all. For example, if all you do is run your web browser to visit websites — including, perhaps, your email — then, while you might want to close and reopen the browser every so often (usually because it seems to be acting up), there’s just no need to reboot the computer.

On the other hand, if you’re running lots of different programs, opening and closing them often, or just using the machine heavily, the answer might be different.

On the third hand, you may be running a single program that’s not well behaved, and as a result, a reboot might be advised.

The rule that’s the exception to the rule

Windows Update is a great example. Many times, the files to be updated are in use, and the only way to update them is during a reboot. The net result is that about once a month, you’ll probably be informed that you should reboot your computer for updates to be applied. Or you’ll find that Windows has simply rebooted for you.

It’s also not uncommon for updates of other software to require a reboot to complete.

In either case, these reboot-forcing updates make the point moot. Update when they ask you to.

My computer is on all day, every day. I run many different things on it throughout the day.

It’s a beefy machine, so performance isn’t really an issue, so I also leave a lot of things running. As I type this, the Command Prompt “tasklist” command shows 413 processes running.1

Since I run so much, it’s not uncommon for me to have to reboot for an update every so often.

If I don’t, though, I find that about every other day or so it starts behaving … oddly. Something might be slow, the mouse might not be as responsive, or something just “ain’t quite right”.

I reboot, and all’s well again.

Reboot when you need to.

That means either rebooting because an update needs it, or because you’re experiencing a problem you think might be addressed by a reboot.

And of course, when you turn your computer off (without using Hibernate, or Sleep), you’re also rebooting.

But in general, I wouldn’t bother rebooting unless one of those situations comes up. 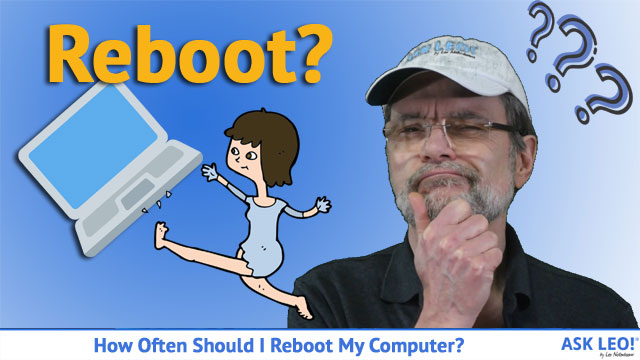 1: To be fair, Windows itself is probably responsible for close to half of those.

17 comments on “How Often Should I Reboot My Computer?”