Windows 7’s days are numbered, it’s true. The end is near.

But what does “end” really mean? Windows XP came to its end years ago, and there are those who continue to use it.

Depending on what you mean by “phase out”, there are several different possible answers.

The gospel according to Microsoft

According to Microsoft’s Product Lifecycle, “mainstream” support for Windows 7 ended in January of 2015, and the end of “extended support” is January 14th, 2020. The only updates it gets now are security related.

So according to Microsoft, “phase out” is occurring now, with the final date, at this writing, nine months away.

But if you dig a little deeper, it’s not so clear. Even after extended support has ended, paid support continues for an unspecified amount of time. For how long depends entirely on how much you’re willing to pay. For companies with a large base of Windows 7 machines, that might be a lot. It’s certainly not something intended for the average consumer.

For us, there’s “Self-help Online Support”, which boils down to existing Knowledge Base articles and discussion forums where we can talk amongst ourselves and help each other out.

But there’s more to it than just Microsoft.

We’re starting to see both hardware and software vendors drop support for Windows 7.

What this means is twofold:

Right now it’s not many — Windows 7 remains too popular to drop it this quickly — but the numbers will only increase as time passes.

This is perhaps as important as Windows’ own support. Depending on the software you use, if its support is dropped sooner, you could face a more pragmatic issue than whether or not Windows itself is getting security updates.

Unfortunately, there’s no schedule of published data. Each vendor and manufacturer makes independent decisions, likely depending on how much it costs them to continue to support Windows 7 as compared to the remaining number of users.

A good comparison is Windows XP, for which Microsoft ended support several years ago.

In one sense, even Windows XP is still not fully phased out — there are those who steadfastly continue to use it. And that’s in the face of zero support from Microsoft, and minimal support, if any, from software and hardware vendors.

So, like XP, Windows 7 will phase out over the course of several years.

How much that impacts you depends entirely on exactly what you’re looking for in terms of being “phased out”. 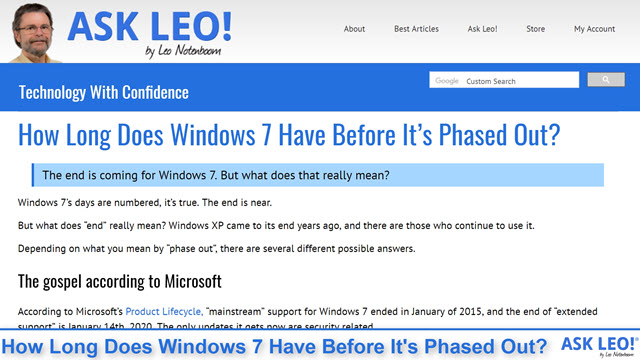 Originally answered on Quora: How long can Windows 7 still be used?

46 comments on “How Long Does Windows 7 Have Before It’s Phased Out?”