It’s a metaphor, but with possible real-world consequences.

What does it mean to mine something that doesn't physically exist? And why might it use so much electricity?

We’ve heard a lot about cryptocurrencies lately, especially Bitcoin. Opinions run the gamut from “worthless artificial gold” to the wave of the future and the universal currency we’ll all be using someday. Regardless of what you think about its future, the underlying technology is fascinating to people like me.

The question is, of course, how does mining something that exists only as bits and bytes in a computer use so much electricity? Heck, just what is “mining” in this context, anyway?

To understand that a little better while sidestepping some of the complexity, we’ll play a game.

Bitcoin mining is a type of game involving exceptionally difficult calculations to “guess” a number with certain characteristics. The first miner to guess the number correctly is rewarded with Bitcoin, giving the game a very lucrative financial incentive. The result is a lot of machines using a lot of electricity to calculate as quickly as they can so as to win the game. The game is a fundamental part of Bitcoin’s blockchain architecture.

Pick a number, any number

That’s it. That’s Bitcoin mining. It’s an incredibly over-simplified analogy, but fundamentally, that’s all mining is: if you guess my number correctly, you’ll “mine” one dollar.

There are a couple of additional characteristics to our game:

Now it’s become a competition: the more quickly you can throw out guesses, the more likely you are to win.

Finally, as soon as someone wins and guesses correctly, I hand out the dollar, pick a new number, and everyone starts guessing again.

Now, I don’t want to give my dollars away too quickly — I have a limited supply — so I throttle the competition.

If I find that people are guessing too quickly, I change the rules. Instead of one billion, I’ll choose a number between one and ten billion (10,000,000,000). Theoretically, that’ll take all the guessers ten times longer on average to guess the right number, because there are ten times as many possibilities.

If my goal is to award one dollar per day, I’ll choose my range so it takes about 24 hours for someone to guess the right number.

That explains the mining concept: a bunch of people trying to guess a number for a reward.

In order to understand why that takes so much electricity, we need to map it more closely to what actually happens when mining Bitcoin.

The reward, as you might guess, is Bitcoin. The winner currently gets 6.25 BTC (Bitcoin), valued at around $325,000.00 USD.1 There’s definitely an incentive to play the game.

Each “guess” isn’t just a guess, but a calculation that is a fundamental part of Bitcoin’s blockchain technology. Blockchain is a topic for another day, but the calculation has several characteristics:

Bitcoin mining: a CPU-intensive calculation in a competition where the winner gets thousands of dollars. Sounds like an opportunity!

Throw hardware at it

Step #1 is to use the fastest computer you can. High-end hardware is the order of the day. While you do stand a (teeny-tiny) chance running a Bitcoin miner on your desktop PC, this has become the realm of computers dedicated and specifically designed to perform these calculations. High-end GPUs (graphics processing units) are particularly useful.

Step #2 is to use as many computers as you can. If you have ten computers all calculating and making guesses simultaneously, you have ten times the chance of coming up with the correct answer.3

Step #3 is to do both: use lots of high-end computers to participate in the Bitcoin calculation game.

Throw power at it

Electricity isn’t free, but its costs vary quite a bit depending on where you are. As a result, Bitcoin (and other similar cryptocurrencies) mining operations are often established in locations where electricity is cheaper.

Sometimes that’s not an issue, but occasionally it can cause a backlash as local resources and power grids are stressed to provide the required electricity.

Raising the price of electricity sounds like a solution, but the likely effect is that cryptocurrency value would increase as well, continuing to make large-scale mining operations lucrative.

Other blockchain and cryptocurrency technologies4 are experimenting with less resource-intensive solutions to the problem, but so far, there’s no clear winner.

It would appear this game will be with us for a while. 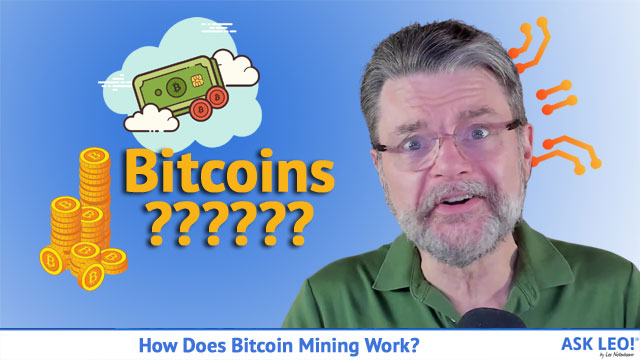 1: One criticism of Bitcoin, and indeed most cryptocurrency, is volatility. Between the time I write this and the time my editor edits it or it’s published, the value can change dramatically.

3: This is why malware exists that installs a Bitcoin miner on your comparatively slow PC. The more machines it can infect, the higher the chance that the malware author might win the game.

4: Most notably Ether, on the Ethereum blockchain, now being used for a variety of different things, including “NFTs” or Non Fungible Tokens.

38 comments on “How Does Bitcoin Mining Work?”