I have two very large internal hard drives. One has my OS on it that I use as my C: drive and for daily use and the other is one that I use for pictures and so on. Is it OK to backup the system (on C:) to the other extra internal HD? Or should I be using an external HD for that?

Each has pros and cons, as do other backup options you might consider.

I’ll walk you through the most common.

Backing up to the same drive

Before I discuss your question, let’s look at the scenario that makes most knowledgeable techies cringe: backing up to the same drive.

For example, let’s say you back up your documents folder to another folder elsewhere on the same drive — maybe the contents of “C:\Users\You\Documents” is backed up to “C:\Backups”.

This protects you from:

This does not protect you from:

Backing up to an external drive

This is a recommended approach. It’s what I often tell people: “Get an external drive and backup software and make sure your system is getting backed up regularly.”

This protects you from:

This doesn’t protect you from:

That’s a long list of pros without too many cons.

Backing up to an internal drive

The only real difference between backing up to a second internal drive versus an external drive is the connection to and location of the drive. Most of the pros and cons of the external-drive scenario above still apply.

There some subtle differences.

Short summary: Backing up to a second internal drive is a surprisingly reasonable choice, and shares most of the same characteristics as backing up to an external drive. Some of the differences boil down to convenience.

Backing up to offline media

Offline media — typically CDs and DVDs, but this might also include flash media — used to be a common form of backup.

The biggest advantage to these destinations is that once written, they cannot be modified, and they’re disconnected from the computer once the backup is complete, so they’re not impacted by any subsequent machine failures.

The drawback is, they’re relatively small compared to the amount of data we want to back up. Backing up anything large — particularly a complete system — takes so many CDs or DVDs, for example, that it becomes unwieldy and impractical.

They still have one fatal flaw, in my opinion.

The amount of data needed to be backed up for a full system backup is so huge as to make online backups impractical. Depending on the speed of your internet connection, a complete system backup would take days, if not weeks, to upload.

The compromise, then, is that online backups are used to backup important data, but not used to back up your system.

Backing up in any form is better than not backing up at all. Exactly how you should back up depends on your abilities and your needs.

One of the reasons folks such as myself often recommend an external drive and backup software is because it’s easy to set up and it gets you the most bang for your buck: significant protection from the most common disasters (hard drive failures and most malware).

If it’s easy, more people are likely to do it.

Backing up to a second internal drive could be a worthwhile approach, as long as you understand what is and is not being protected as a result. 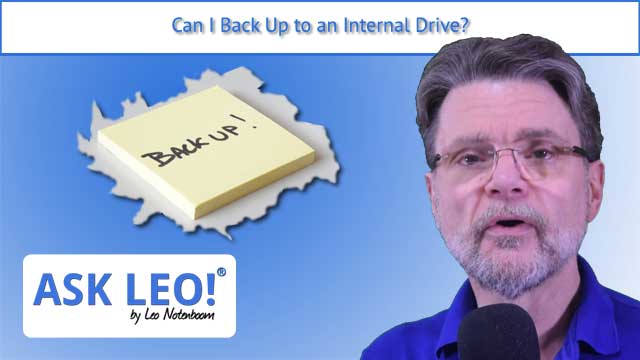 17 comments on “Can I Back Up to an Internal Drive?”