They protect you from failure as well as malware.

Don't overlook backing up as part of your security. When the worst happens, it's your backup that will save you.

We tend to think of backing up as being something separate from keeping our computers secure.

Nothing could be further from the truth.

To mis-quote the cereal commercial: backups are an important part of a healthy, secure breakfast.

Backups can save you from malware as well as hardware failure and user error. When used properly, backups also provide you with a safety net from even the most destructive of malware: ransomware. Backups are an important part of your overall security.

Backups are a great way to ensure you’re protected from hardware or software failure or even your own mistakes.

Online or offline, the drill is the same: when something goes wrong, rely on your backup to save you (or at least reduce the impact).

No protection from malware is ever 100% safe. We’re all at risk. A proper backup dramatically reduces the impact of malware that does make it through.

With a full-image backup, malware becomes an annoyance instead of a disaster.

Everything I’ve listed above about malware applies to ransomware.

Yes, it is that simple.

“But ransomware can encrypt backups!”

That’s no reason not to back up.

People still die wearing seatbelts, but that’s no reason not to buckle up.

And again, ransomware is just malware. Malware that is not ransomware that deletes backups has been around a long time. Same issue. Same solution.

You’re safer with a backup than without.

“So I’ll disconnect my backup drive when I’m not backing up.”

I recommend you do not disconnect your backup drive.

That’s like saying you’ll only put on your seatbelt when you know you’re going to be in an accident.

By keeping your backup drive connected, you can automate the backup process so you don’t have to think about it, much like making your seatbelt an automatic habit when you get into the car.

Having a backup process work without needing your intervention is more important than worrying about the backups themselves being encrypted by ransomware. If you have to initiate a backup to make it happen, it won’t happen.

And you’ll be left without a current backup, even when you need it for reasons other than ransomware.

Adopt the mindset that your backups are an important part of your security strategy.

Above all: back up. Someday, somehow, you’ll be very glad you did. 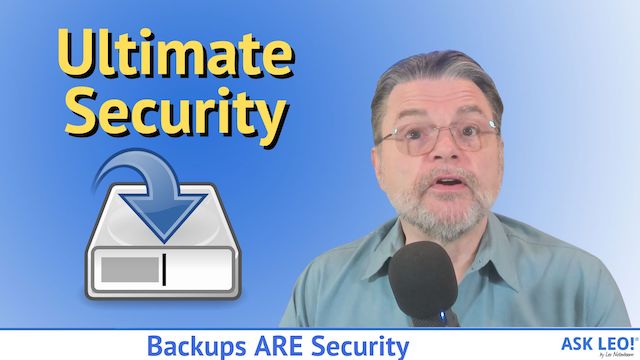 12 comments on “Backups ARE Security”