Why is Internet time four or five minutes ahead of Network TV time?
I set my VCR according to my computer and recordings are late to start
and last too long. Had to put it back the way it was.

My experience is actually the opposite of yours – a couple of
networks seem to “run late” and I end up missing the crucial last
minute or two of shows from time to time.

So I can’t speak for the TV networks, other than to suspect that
some simply don’t do time very well, perhaps intentionally or
otherwise.

But we can look at your computer and this concept of “internet
time”.

Let’s be clear, there is no such thing as “internet time”. There is
time – official and calibrated time – in the form of a clock made
available over the internet, but there’s no special time or time source
specifically for the internet.

The official time for the United States is maintained by the U.S.
Naval Observatory. At http://tycho.usno.navy.mil/ you’ll find all sorts of
information about how the USNO maintains the current time to an
accuracy of something like 10 nanoseconds or 10 billionth’s of a
second.

The USNO makes the current time available via several mechanisms (on
their web site, for example), but the one we’ll care about for our
purposes today is made available on the internet via a protocol called
“NTP” or Network Time Protocol. Via a network of servers to distribute
the load, any computer on the internet can ask “what time is it?” and
get a highly accurate response.

And Windows is ready to ask that question every so often to make
sure your clock is accurate, and stays accurate.

In Windows XP and Vista right click on the clock in your task bar
and click on Adjust Date/Time. 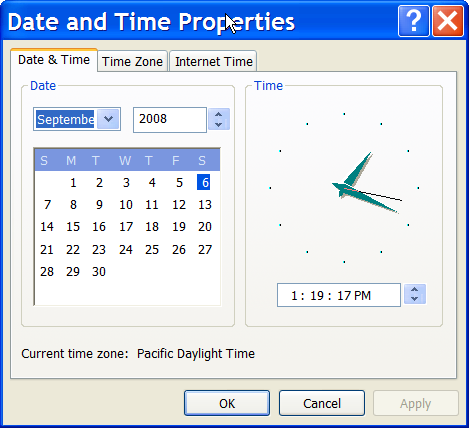 Ignore the time for now. Instead, click on the Time
Zone tab (or in Windows Vista, click on the Change
time zone… button to get a somewhat similar dialog): 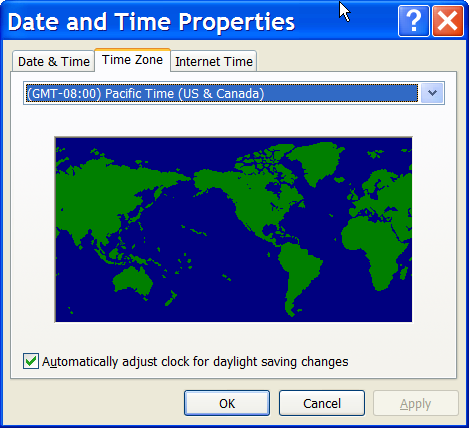 Make sure that your time zone is set correctly, selecting from the
dropdown list. Also make sure that Automatically adjust clock
for daylight saving changes is checked. 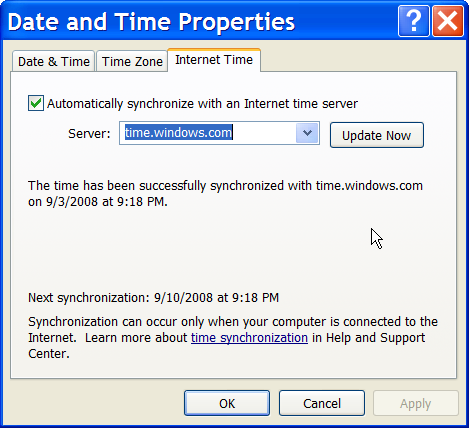 Make sure that Automatically synchronize with an Internet
time server is checked. The default time server is typically
time.windows.com which should be sufficient. The dropdown list will
also include alternatives, typically time.nist.gov in the United
States, which is also a fine alternative. (In Windows Vista you’ll have
to click a Change settings button to make changes.)
You can also select another time server by typing its name in as
well.

As you can see, the dialog lets you know when the last time update
was performed, and when the next one will be. Alternately, you can
always click on the Update Now button to force an
immediate update.

Once you’ve done so, your clock should be as accurate as it can
be. If the TV networks are off, well that’s their problem not yours I’m
afraid, and out of your control.