I have [a lot of applications on my desktop}. Would my desktop load
faster if I put all of these apps and utility programs into one desktop
folder rather than having all the icons appear on my desktop? Seeing
them doesn’t bother me and my desktop loads pretty fast, but my kids
are horrified by all they see on my desktop. They say that even though
these apps are not listed in my Startup Menu or in Start Programs and
even though the apps don’t appear to be running in Task Manager
processes, they are running and using valuable CPU. Can you enlighten
me and my kids?

I’m with your kids, sort of. I’m horrified, but not for the reasons
that they’re horrified.

And even though I am, if I were you I’d likely not change a
thing.

I know that seems like contradictory advice, but it all boils down
to being a matter of taste, and nothing more.

The short version is this: icons that are displayed on your desktop
are not running programs and they do not take any additional resources,
with one tiny exception. That very tiny exception is that it takes a
teeny tiny amount of time to draw the icon itself on the desktop each
time the desktop is displayed, particularly when you start up. But
that’s it.

Other than that, having an icon on your desktop is almost exactly
the same as having an item in your start menu somewhere. It does
nothing until you actually use it.

So why am I, like your kids, horrified? Well, like I said, it’s for
a completely different reason.

I’m a neat freak when it comes to my desktop.

In fact, here it is: 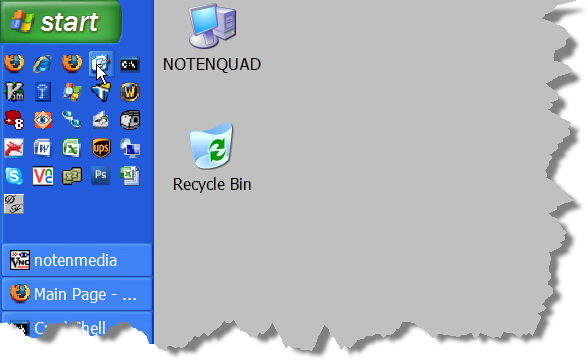 In case you’re wondering, I put my taskbar on the far left – it
makes the most sense for my dual monitor setup which gives me a full
desktop that spans the two monitors looking like this:

As you can see, I have exactly two icons on my desktop: “My
Computer” (which I renamed to the machine name, so I can keep my
machines straight when I’m looking at them), and the Recycle Bin.
That’s it.

It’s actually very simple: what’s the point in putting shortcuts to
things on the desktop which is completely hidden by running programs
most of the time? Shortcuts are much more useful in the quick-launch
area (which you can see in the image above has quite a bit), and in the
start menu itself. If I have to minimize or move a bunch of windows to
access the shortcuts on my desktop then it doesn’t seem like much of a
“short cut”.

But that’s just me.

Like I said above, it’s a matter of taste.

I regularly see machines where the desktop is completely covered
with icons, and typically with no organization whatsoever. I shudder
not only because of the aesthetics, because I wouldn’t know how to go
about finding anything in that mess.

But again, that’s just me. Clearly the users of those computers are
quite comfortable with their setup.

So there’s your answer: if you like the way things are set up, don’t
bother changing it. You’re not impacting your computer’s performance in
any way that matters.

On the other hand, if you’re interested in getting more organized,
then by all means … organize away.

24 comments on “Do icons on my desktop mean programs are running or will they otherwise slow down my system?”