I just purchased a new computer with a 1TB (terabyte) hard drive. Windows is telling me it has 976,760,000 KB of disk space. I don’t get it. Shouldn’t it be 1,000,000,000 KB? Is there anything I can do to recover the other space? If I go to Windows Explorer and click on the hard drive symbol, it will show me the space on the hard drive. It said the total available space is 931 GB! What happened to the other 69 gigabytes?

They were never there.

Believe it or not, there’s no real, agreed-on definition of what a gigabyte is.

Let me clarify: there are definitions, plural. And which one gets used depends on how you think.

And sure enough, my own one terabyte drive shows exactly that:

“1TB” sure sounds like you’re getting a bunch more for your money than “931GB”, doesn’t it?

So, you’re getting a terabyte drive, alright — unless you’re thinking like a computer.

The problem is that the terms kilobyte, megabyte, and so on are all ambiguous1. The same term can mean different things depending on context, or even just depending on a whim.

Because of this confusion, new terms have been created: “kibibyte” (and the mebibyte, gibibyte, tebibyte and so on). (Note the spelling with a “b”.)

And in contexts where these terms are used, “kilo”, “mega” and so on are all assumed to take on their correct “human” values, based on powers of 10.

This means that the salespeople weren’t lying when they sold you a terabyte drive that has only 931GiB on it. If anything, it’s the manufacturers’ failure to use the new, more accurate terms that leads to the confusion.

And, to be fair, I can’t blame the OS designers for not wanting to throw even more generally unheard-of geeky terms at us.

Even though what I just described is the major reason for the discrepancy in total disk capacity, other factors also contribute to less space being available than you expect.

On a completely empty hard disk, the operating system reserves some amount of space for its own use. For example, the top level directory structure, even if empty, takes some space. Security information, the Recycle Bin, and other information is placed on the hard disk before you ever create your first file. Exactly how much space depends on how the disk is formatted.

And of course, if this is your system drive, the operating system may also have large hidden files, including your swap and hibernation files. In recent years, many hard disks include hidden partitions that eat up even more space. 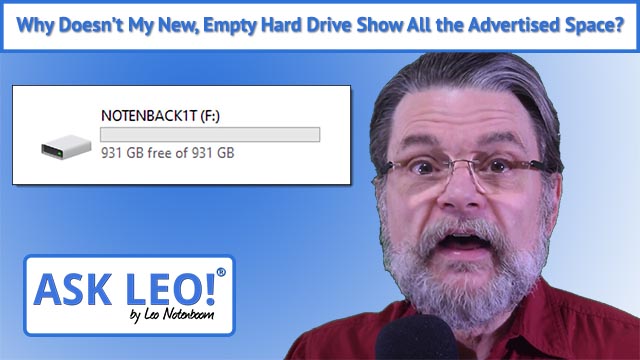 42 comments on “Why Doesn’t My New, Empty Hard Drive Show All the Advertised Space?”