Why is there such a long delay before Drives & Files appear when double
clicking on “My Computer” in Windows XP?

It started after I had to do a deep cleaning of my PC in terms of spyware
and used several registry cleaners. Everything seems to run fine and smooth
now, but I still have this problem.

This is another of those situations that can actually be caused by many,
many different things.

Fortunately, there are a couple of really common causes, so I’ll look at
those and we can see whether they help you at all.

When you double click on My Computer it launches Windows
Explorer which then goes off and constructs a summary of all the mass storage
devices on your system, as well as a few other special categories of devices.
(“Mass storage” devices, by the way, are disk drives and things that look like
disk drives.)

Here’s a look at mine: 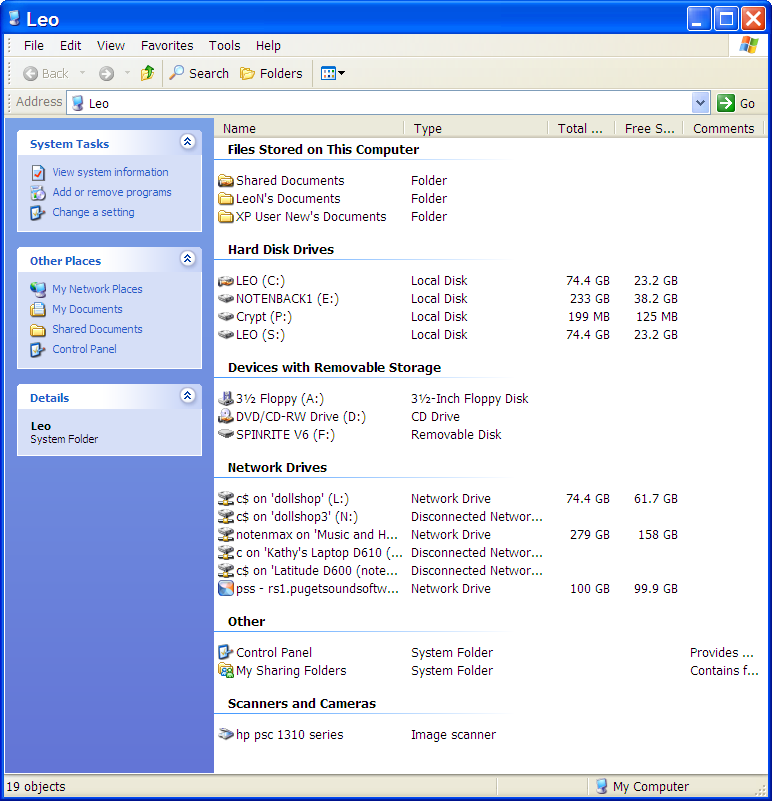 As part of pulling together that summary, Windows Explorer actually goes out
and queries each device listed for information. For example, in order to
determine that my “C:” drive has 23.2 GB of space left, Windows Explorer
actually checks a few things on the disk. Makes sense, right?

Similarly, in order to determine that drive “F:” is a “Removable Disk” (it’s
a USB thumbdrive) and that it’s labeled “SPINRITE V6” (I have a copy of the
excellent hard disk management tool SpinRite on it), it had to open and actually read the drive.

The most common cause of a delay in opening Windows Explorer is that one or
more of the drives listed have become inaccessible.

For example, I have a persistent network connection on drive “N:” to a
machine at my wife’s business, but as shown in the image above, it’s currently
disconnected. Windows Explorer’s attempts to get information about that drive
will fail. That may add time – the failure may be in the form of a
timeout. Windows Explorer will ask for the information and will wait for some
amount of time for it to come back. When it doesn’t, it labels the drive as
“Disconnected” and moves on.

“The most common cause of a delay in opening Windows
Explorer is that one or more of the drives listed have become
inaccessible.”

The timeout is typically noticeable, and if you have more than one network
drive in this situation, it can be very noticeable.

The second most common reason for a delay is something called “spin up”
time.

You can’t tell from the display here, but my drive “E:” is an external
Maxtor USB/Firewire hard disk that I use for backing up. Many disks,
particularly external ones like this, will turn off their hard disks after some
period of not being used to save power. The circuitry remains active,
but the hard disk stops spinning. The next time that the drive is accessed for
any reason, that hard disk must be turned on and must start spinning again.
There’s often a noticeable delay until the hard disk reaches its operating
speed.

And yes, Windows Explorer’s display can be affected by this delay.

33 comments on “Why does Windows Explorer take so long to display sometimes?”