I see text talking about RAM but it also talks about a “memory module”. I
know what RAM is,but what is a memory module?

RAM is, of course, the Random Access Memory in your computer; the memory
in which programs and data reside when they’re actually in use and running.

Memory modules are typically … the memory in which programs and data
reside when they’re actually in use and running.

OK, so they’re the same thing, only different. And since that doesn’t help
at all, let me explain with a picture or two.

Memory modules are nothing more than the physical cards on which one or more
RAM chips reside.

Portion of a RAM Memory Module

If you were to open your computer, you would likely find one or more memory
modules inserted into slots similar to those colored red and yellow near the
top of this picture:

“What you might actually have or how much your computer
will actually support depends on the specific motherboard installed.” 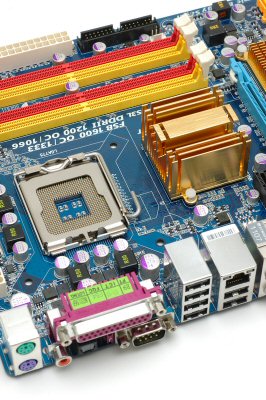 As you can see there are typically multiple slots for memory modules.

As always, if your computer has the capacity for it, adding RAM, by adding
memory modules or replacing memory modules with modules of greater capacity,
remains one of the easiest and most effective ways to speed up Windows.

Start by checking with your computer’s manufacturer to see what your machine’s
capacity is, and what types of memory modules might be required.