I recently purchased a computer. It came with Vista premium. The programs I
bought this computer for will not work with Vista. It keeps telling me there
are compatibility issues and to got to the Microsoft website. I found no
support there. I guess what I’d like to know is if it is possible to remove the
hard drive with Vista and install my last hard drive with XP? All the programs
I need will work fine on XP. My old processor just wasn’t fast enough. I know
the question is kind of vague and might not be answerable with the lack of info
I have given. My old computer was a put together by a friend who gave it to me
when he was done with it. The new one is a HP a1700n. Or, is there a way to
remove Vista and install XP on this one. In order for me to use Vista, I will
have to replace most of the programs I work with. That is a little too spendy.
Any suggestion would help.

I haven’t taken the Vista plunge just yet (though Vista Ultimate is sitting
on a shelf behind me as I type), but your complaint is one that I’ve been
hearing from time to time: Vista doesn’t run everything just yet. Normally it’s
a problem with hardware drivers, but I understand some applications may have
difficulty as well.

So what’s the best way to “revert” to Windows XP?

There are a couple of options, but none of them are truly seamless.

Unfortunately the idea that you have – just swapping out the hard drive –
will probably not work. Windows XP on the old hard drive is configured for all
the hardware on that old machine. Booting it in the new machine will at best
confuse the heck out of Windows as nearly all the hardware is changed out from
underneath it at once. At worst Windows XP simply won’t boot.

You could certainly remove Vista and install XP. Just grab a Windows XP
install CD, boot from it and proceed to install Windows XP from scratch. When
it asks you to choose a partition, choose the one with Vista on it, and have it
reformat the disk. Vista will be gone, XP will be in its place, and you can
proceed to set up the applications you need. Be sure to keep the Windows Vista
installation DVD that should have come with the new machine for use someday in
the future.

If the hard disk is big enough, you might consider a dual-boot option
allowing you to boot your system into either Vista or XP. It’s been a while
since I’ve played with dual boot, but it’s a viable option if you want to keep
Vista around for other things.

The approach I would take, however, is similar, but significantly more
flexible.

I would use a virtual machine.

Virtual machines are, in essence, a virtual “PC in a window”. When you start
a virtual PC, for example, the first thing you see is a virtual BIOS screen as
it starts up and tries to boot. I use a virtual machine to run Ubuntu Linux in
a window on my Windows XP laptop: 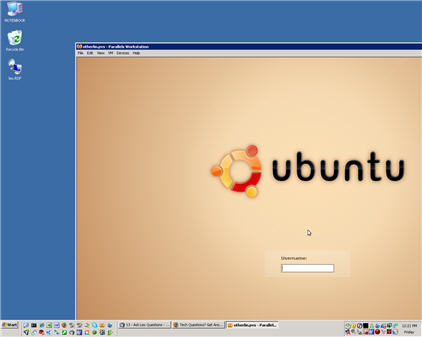 So you can probably guess where I’m headed. I would leave Windows Vista
installed, and create a separate virtual machine that would run Windows XP as a
“guest operating system” in a window within Vista, where Vista is the “host
operating system”. That installation of XP could then run all of the
applications that you care about.

It’s the best of both worlds, in my opinion.

The virtual machine technology I’m using is Parallels Workstation for Windows. While I’ve not run
Parallels under Windows Vista, they do list it as supported, as both the host
operating system, and as the “guest” – meaning I should be able to try Vista in
a virtual machine within Windows XP as well.

Parallels does an excellent job of mapping almost all the hardware through
to the guest operating system, with the most notable exception of 3D graphics
acceleration, so no gaming, but most everything else is available and operates
at near full speed.

16 comments on “What&apos;s the best way to revert from Windows Vista to run applications that don&apos;t work?”