In one of your answers, you recommended booting from a “live” CD.

I have no idea what that means. Explain, please.

Live CDs (or DVDs) are exceptionally convenient to have around as diagnostic
aids when you’re experiencing a problem with your computer.

I’ll describe what I mean by Live CD and I’ll show you a couple of
examples.

A Live CD or DVD (I’ll use CD throughout, but this applies equally to either form as well as bootable USB devices, in some cases) is a CD from which you can boot your computer and have it work, without requiring other software to be pre-installed on the machine and without modifying the machine’s hard disks.

In fact, you don’t need a hard disk at all, in most cases.

The idea here is simply that the Live CD is completely self-contained. You can boot from it and run whatever operating system is contained thereon, all without making any changes to your computer and requiring anything but the basic hardware support from your computer: keyboard, display, mouse, and frequently network.

My most common recommendation is typically Ubuntu Linux.

That may surprise some, as it’s not really billed as a Live CD. And yet, if you boot from it: 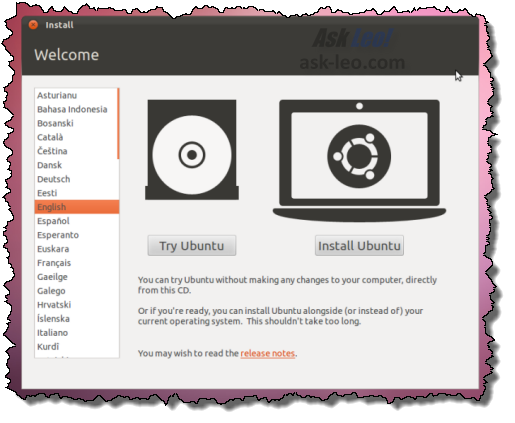 If you make sure to select Try, then Ubuntu behaves as a Live CD. Once booted, you can access the internet, run FireFox, and perform a host of other tasks – all without having had to install anything, anywhere.

For diagnostic purposes, Ubuntu includes a standard set of common utilities that can be used to access, and in some cases, repair your computer.

Knoppix has been around for a long time. It’s another Linux variant that is designed specifically to be a Live CD. 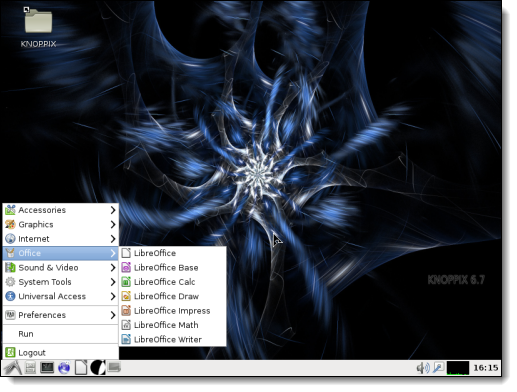 Boot into Knoppix from CD and you’re running a fully functional machine without touching your hard disk.

As you can see in the example screen shot above, Knoppix comes complete with LibreOffice among many other useful productivity and diagnostic tools.

SystemRescueCD, as its name implies, is a Live CD specifically aimed at diagnosing and repairing system issues. 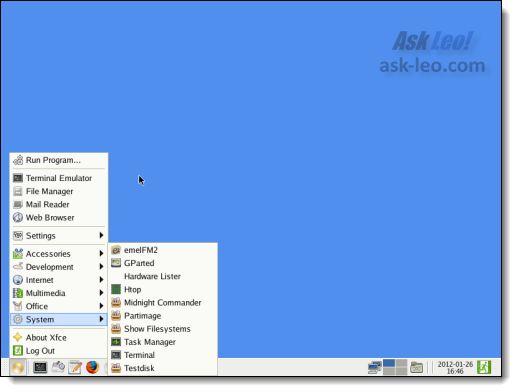 SystemRescueCD contains a long list of tools, ranging from the simple to the geeky that can be used to repair an ailing system.

What’s a Live CD good for?

The single most common use of a Live CD is to recover files from a damaged hard disk. 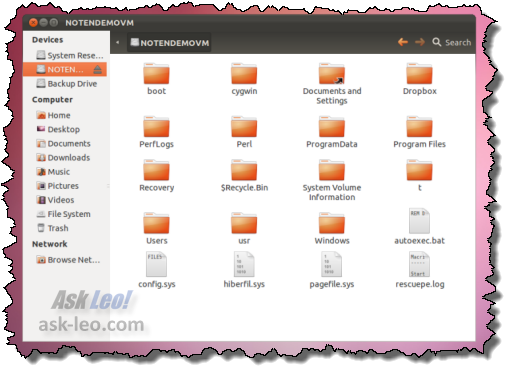 Why are they all Linux?

Unfortunately, the licensing terms under which Windows is provided prevents the distributions of Live CDs built using Windows.

The one solution is to build your own Live CD using a tool like BartPE, which takes your existing legal Windows installation and from it, builds a bootable CD.

It’s an extra step and it’s not always necessary. Hence, the focus on Linux-based Live CDs which are readily available and ready to go.

Even though it’s not required and it’s not modified by running the Live CD, the system hard disk is typically accessible once you’re running the Live CD. Pictured above is the hard disk of a Windows 7 machine, viewed through Ubuntu Linux’s version of Windows Explorer. Using that, you can navigate the hard drive and copy files to an external hard drive, another machine on your local network, or perhaps even upload them to the internet.

If the hard disk is working but your machine won’t boot for some reason, it’s a great last resort for recovering files before you reformat and reinstall.

I’d say that the next most common use of a Live CD is to help determine if a problem is hardware or software related. By booting up your system from a Live CD, you can quickly tell if the keyboard, mouse, monitor, CD drive, and the hard drive are all working properly. If they are, then that might be important data in determining the root cause of a software-related problem that you’re experiencing.

Also important is the ability to modify the contents of the hard disk. It’s not uncommon for technicians and other repair or recovery personnel to boot from a Live CD and then actually go into the Windows files on the hard disk to make a repair of some sort.

About the only real drawback of most of the Live CDs is that they do tend to be rather geeky at times for most operations beyond simply examining your hard disk and copying files.

There are many Live CDs

I’ve only touched on three examples of Live CDs. In fact, there are many, many more.

In researching, I found this list of perhaps 100 different Live CDs.

Regardless of which you choose, I actually recommend downloading one – perhaps one of the ones listed here – and trying it out to get just a feel of what a Live CD looks like running on your machine.

You never know – someday, it might just come in handy.