Leo, I understand that Microsoft will be aggressively pushing IE8 and IE9
installation. I have been reading Ask Leo! for years, and when IE8 was first
released, I recall questions like, “How do I remove IE8?” Users were, apparently, having many problems with IE8, so I have avoided it all this time. At the
time, you recommended that readers use caution and perhaps not install IE8 unless
necessary. Would you please revisit the question of upgrading to IE8 and/or IE9
in view of the fact that Microsoft is trying to get everyone off IE6 and
IE7?

Can those of us with Windows XP skip the IE8 upgrade and go straight to IE9,
and avoid the problems with IE8? I have XP with IE7. I have been having issues
with a few websites not viewing properly, especially Facebook. They
now have a permanent banner on my FB home page telling me to upgrade to IE8 or
switch to Chrome.

Microsoft would like to see IE6 and IE7 disappear for a variety of
reasons.

And, to be honest, so should you.


The rule of thumb

My rule of thumb with Internet Explorer versions is actually pretty simple.

But do upgrade eventually.

Wait for a month or two until any major problems have been identified and hopefully resolved. And then take the plunge.

IE8 is the last version of Internet Explorer that will run under Windows XP. IE9 requires Windows Vista or better.

At this point in time, there’s no reason not to upgrade to IE8 on Windows XP. It’s actually more stable, more secure, and in some cases, even faster than IE7. It’s most definitely more secure than IE6, which should most definitely be avoided. 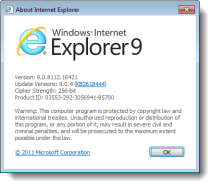 IE9 has been out long enough now that it pretty well had the worst issues shaken out of it. In general, I don’t see a reason to avoid it.

In fact, IE9 has several security and speed enhancements that actually make it preferable to IE8.

Whenever I recommend IE, or specifically IE9, I definitely get negative feedback (occasionally with profanities included) from a few people.

Let me be clear: Internet Explorer works and works well for the vast majority of people.

However, the vast majority is not everyone.

And many of the IE problems that folks might encounter aren’t even due to IE itself.

If you are having problems with Internet Explorer, these three tips will very often clear things right up:

If you’re still of a mind to avoid IE…

In reality, the “browser wars” are pretty much at a dead heat. In my opinion, you can’t really go too far wrong with any of the top three major players:

Each has its strengths and weaknesses, each has its (raving) fans and detractors.

Each of them works well for a large number of users.

If IE’s not your cup of tea for some reason, give one of the alternatives a try.

32 comments on “What version of Internet Explorer should I be running?”