Make sure your computer is as up to date as it should be.

Drivers are critically important components of your computer, but knowing how and when to update drivers isn't as easy or as obvious as we might like.

I have been reading about the importance of updating, if required, the various device drivers within a system. As I understand it, I can update drivers by identifying the driver that may require updating and then by accessing the manufacturers’ website and determining if there are any updates. If so, I believe that the update can be downloaded. Does the download overwrite the existing data within the device in question? I must confess to being a bit nervous regarding this approach and because of this, I have looked at driver update services.

Drivers are another one of those “computer things” that are just so much confusing magic to the average computer user.

I’ll touch on what they are and my philosophy about how and when to update them.

Drivers are software that translate Window’s generic instructions into specific commands to make the hardware do what it does. Each piece of hardware attached to your system requires a driver for this translation.

Some confusion comes from the fact that there are a ton of drivers included with Windows. When you install Windows, or when you add new hardware to your computer, Windows will frequently notice the change and automatically install the drivers. That’s what “plug and play” is all about: you install new hardware, Windows installs corresponding drivers, and things just work.

However, not all possible drivers are included with Windows. When you have hardware whose drivers are not supplied with Windows, the manufacturer may supply them — typically with a setup program accompanying the device — or Windows may search online to find them.

How to update drivers

There’s no single approach to updating drivers. The most common approaches are to let Windows Update handle it, or run installation or update programs supplied by either your computer or device manufacturer.

Here’s what I do.

You’ll note that I did not list driver update services.

How not to update drivers

Keeping drivers updated, or even just knowing when and what to update, is not a simple task.

As a result, there are a number of tools claiming to do it for you. They supposedly scan your system, tell you what’s out of date, and offer to update them for you.

Note that I said supposedly. Many are scams. They often:

Even when legit, I believe driver updates are too important to trust to third-party tools.

When to update drivers

Unlike the rest of the software on your machine, when it comes to device drivers, I’m a firm believer in “If it ain’t broke, don’t fix it.”

That means I don’t update drivers just for the sake of updating drivers. I need a reason.

The catch is that it’s not always obvious a driver might need updating or that something is broken and in need of fixing.

The reasons I update drivers, presented in the order in which they most commonly happen, include:

Sometimes when diagnosing problems, it’s helpful to have Windows reinstall a driver without necessarily updating it. How Do I Force Windows to Reinstall a Driver? covers how.

Microsoft takes a lot of heat for releasing software that isn’t quite ready. Without debating that, it’s often due in part to the reliance on the drivers and software created by others, such as hardware vendors. As you might expect, there are vendors with good reputations for producing quality software, and others without.

Driver problems resulting from an upgrade are not unheard of, and the symptoms aren’t always as dramatic as a blue screen of death. I updated drivers for my wireless network some time ago, and suddenly the network would drop whenever I left a Remote Desktop Connection. It was annoying, but I lived with it until I had time to reinstall Windows from scratch.

Hence my “if it ain’t broke, don’t fix it” mentality. Driver updates should be painless, and should result in things getting better. Most often they do. Sometimes they do not.

To answer another part of your question: a driver update will replace the previous software, but if the update happens properly, settings and configuration information will be preserved. Sadly, that too is at risk if the manufacturer does a poor job of providing their updates.

How do I find the drivers on my computer?

Normally, you shouldn’t need to find the drivers on your computer, as they’re stored in many different places and exposed in several ways. The simplest approach is to open Device Manager, locate the device you’re interested in, and check the properties for that device. You’ll find the version of the driver software listed, as well as the location of the specific files.

Do I need to update drivers on my computer?

You generally do not need to update drivers on your computer unless you’re experiencing a problem for which drivers might be a solution or diagnostic step. Windows Update updates drivers for you automatically. Some hardware may include additional monitoring software that will either do the same, or notify you when an update is available.

How do I check if my drivers are up to date?

It’s surprisingly difficult to be sure if specific drivers are up to date. The best way is to let Windows Update check. For additional or more current updates, the most common solution is to visit the computer or manufacturer support website and manually look for updated drivers.

Most device drivers will be updated automatically by Windows Update. Some hardware — most commonly hardware for which you had to separately install drivers — may include a utility of their own to automatically update drivers, or at least notify you that they are available. It’s rare these days, but there are occasionally devices for which drivers do not automatically update.

What happens if I update my graphics driver?

When you update a graphic driver (or a driver for any device), the software installed on your computer is replaced with the new version. The device may have to be restarted in order for the new drivers to take effect. In the case of graphics or video drivers, this can result in a momentary flash. In the case of network drivers, it can result in a brief drop of your connection. In rare cases, updating a driver will not be complete until your computer reboots.

What is the best software to update drivers?

The best software to update drivers is Windows itself, followed by the utilities provided by your computer’s manufacturer, and then any utilities or updates provided by the manufacturer of the specific hardware component. Third-party utilities that offer to check for driver updates are generally not a good idea because too many of them are ineffective or outright scams. 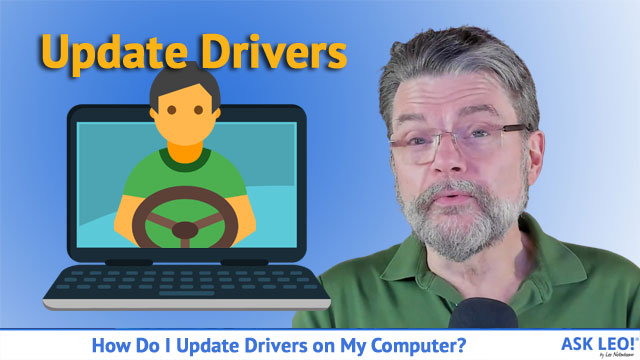 28 comments on “How Do I Update Drivers on My Computer?”