When I open a page it comes up in a little box, but then I click the square
it will open up all the way. Why is it doing this? It’s just a little oblong
box in one corner then it has a little square box where i click to make it open
all the way.

This happens to people surprisingly often, and if you’re not really familiar
with adjusting windows to your liking, it can be very perplexing.

So, it’s time to cover a few fundamentals.

Most programs open and operate in a “window” on your screen. That window has
three possible states:

(I’m using Firefox in my examples, so if you’re using Internet Explorer or
experiencing this with some other program, things may look just a little
different for you. The concepts are the same, however.)

“… most programs, Internet Explorer and Firefox among
them, remember their most recent restored size.”

In both cases the window is actually in the “restored” state – it’s on
screen, not minimized, and it’s not taking up the entire screen.

The “little square box” you’ve been clicking on is the “maximize” icon in
the programs title bar. It puts the window in the maximized, full-screen state.
On its left is the “minimize” icon, which keeps the program running but makes
it accessible only through the task bar, and on its right is the close icon,
which is used to close the program completely.

So when you click on that “little square box” you’re telling the program to
maximize itself and take up the entire screen.

There’s another approach to resolving this issue that, as we’ll see in a
minute, may actually be more helpful in the long run.

Move your mouse over one of the corners or side edges of the window until it
turns into a double arrow:

This is an indicator that you can resize the window. While the
mouse is positioned as it is, click and hold the mouse, and drag it in
whichever direction would make the window larger. For example here I’ve grabbed
on to the lower right hand corner, so I’ll click, hold, and drag the mouse
further down and to the right: 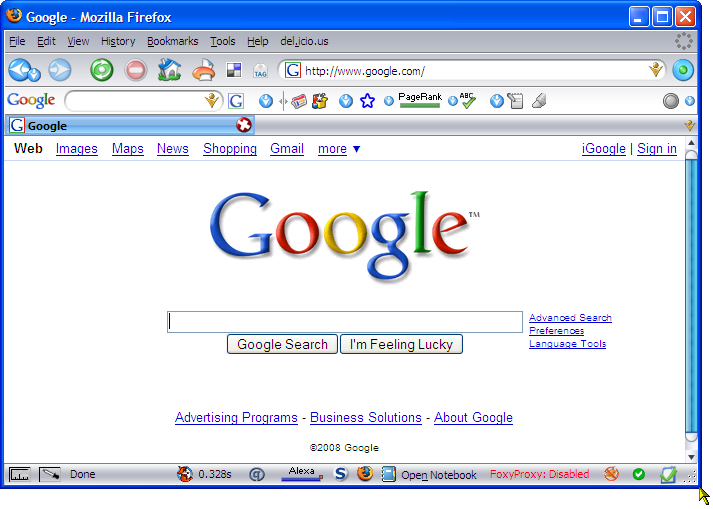 If a window is resizable, and not all are, then each corner and each side of
the window edge can be clicked on and held to drag the corner or side one
direction or another.

It’s a useful skill since windows aren’t always the most optimal size, and
making everything maximized means you can’t see what other programs are
doing.

The first thing to realize is that most programs, Internet Explorer and
Firefox among them, remember their most recent restored size. That
means the mere act of resizing the window instead of immediately maximizing it
should have resolved the issue for you. The next time the program starts up, it
should appear at the size you most recently left it.

The real question is how did it “remember” such a tiny size to begin
with?

There’s no real answer here, as there are many possibilities. The program
itself could have gotten confused or stray mouse movement or even confused
typing of a sort could have altered the window’s size before it was last
closed. A crash of either the application or the computer could have caused the
prior remembered size to have been lost or altered.

There’s really no way to know.

But the great news is that it’s easy to resolve with just a click and a
drag.

7 comments on “Pages I visit open in a tiny window, how do I make it bigger?”