Ever since Windows 7 came out, I’ve received a slow but steady stream of questions regarding the new “Libraries” item that shows up in Windows Explorer.

And I’ve avoided dealing with it.

Why? Because in my opinion, the Libraries feature does little more than add confusion to an already confusing situation.

It’s time to dive into Libraries and begin to understand exactly what they are and are not. From there, you can decide whether they’re an incredibly useful feature or nothing more then a confusing distraction.

For example – and I’ll probably say this repeatedly – Libraries are not folders.

Told you it’d be confusing.

A Library – say the “Music” Library that shows up in default installations – is nothing more than a collected view of one or more folders.

It’s actually a very simple concept, but even that description sounds confusing. 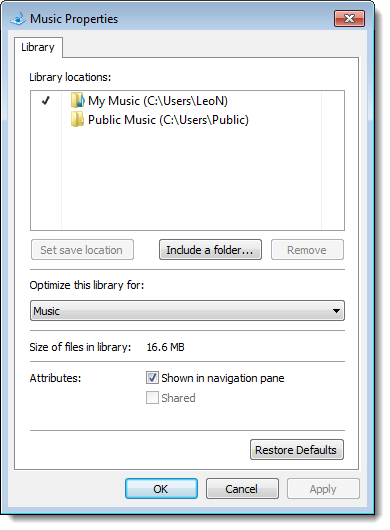 Note that it lists two folders as “Library locations.”

Where “LeoN” would be replaced by your login name on your machine.

“
Libraries are not folders

Using Music as the example, here’s the magic behind Libraries:

The Music Library is simply showing you the contents of the folders “C:Users\LeoN\My Music” and “C:Users\Public\Public Music”, combined.

Read that again, because it’s important. It’s very simple, but completely not obvious.

A Library is not a folder. A Library is simply another way of looking at the contents of multiple folders in a single place.

Continuing with example of the Music Library, let’s create a couple of files:

That’s one music file in my private folder and another in the public folder. It’s important to note that these two files are in two different folders.

When we look in the Music Library, we see both files:

So far, so good. The Library’s showing us the combined contents of the two folders in a single place.

Now, it gets confusing.

Here’s what we see in the Music Library:

My guess is that over half of the confusion and problems I see related to Libraries are a result of that.

Confusion #2: Where do files go?

So we’ve established that a Library is not a folder, but rather a view or a way of looking at the contents of multiple folders.

But you can kind of/sort of treat a Library like a folder. For example, you can copy files into the Library.

But if a Library is not a folder, where do the files get placed?

Let’s look at the properties of the Music Library again: 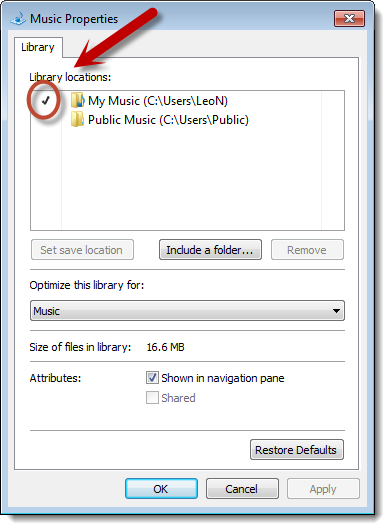 I’ve highlighted the checkmark next to the first folder location. The checkmark indicates which of the actual folders is consider the “default” folder. That’s the folder into which files will be placed when they are copied into the Library.

The result is that if I copy a new file into my Music Library, it will actually be placed into the “C:\Users\LeoN\My Music” folder.

The technology behind Libraries isn’t really all that new. In fact, you’ve been using it since the days of at least Windows XP and probably several versions prior.

It’s basically the same thing as what’s been happening to your Start menu and Desktop all along.

The Start menu is really a view on two different folders. The specific folders may have changed over time, but on my Windows 7 desktop, my Start menu is actually built from the combined contents of two folders:

Very much like Libraries, the Start Menu is nothing more than a view of the combined contents of two folders.

The same is true for the items on your Desktop as well.

Libraries can be useful

I don’t want to completely bad-mouth Libraries, as they can be useful.

For example, if I have multiple Music folders all over my machine – perhaps an iTunes collection, a folder with all my Amazon purchased MP3s, another folder or two or three with my previously collected music – it might be convenient to create a Library or update the existing Music Library to reference all those locations. That way, the Library becomes a one-stop location for accessing all of my music, wherever it might be.

If the Show in navigation pane option is greyed, then there’s another option you need to change first. (As if Libraries weren’t confusing enough already.)

In Windows Explorer, click on the Tools menu, the Folder Options item, and then the General tab. On that dialog is a setting “Show all folders”. Make sure that is not checked, and then click OK.

You should now have access to the Show in navigation pane setting.

(Hat-tip to Windows Seven Forums for the answer, and my assistant Mark for verifying the solution since I wasn’t experiencing the problem myself).

Some might label me a luddite for suggesting this, but unless you really understand exactly what Libraries are and are not, I suggest you ignore them completely.

I’d even go so far as to uncheck the “Show in navigation pane” option that you see in the Properties dialogs before. That won’t make any files disappear, it’ll simply remove the Library view on the folders that contain your files.

Instead, I’d focus on using the actual folders you care about directly.

My guess is you don’t care about “C:\Users\Public\Public Music”, so all you really need is your own music folder – “C:\Users\LeoN\My Music” in my case.

Reference those actual folders directly rather than trying to use Libraries.

It’ll be a lot less confusing and you’ll know exactly where your files are.

If Libraries sound interesting to you, and you now understand what they are and are not, then use them as you see fit, of course.

But if you’re just not quite sure, they’re completely safe to ignore and probably less confusing to do so. Just use the regular folders that you’re already familiar with instead.

That’s exactly what I do.

64 comments on “Just What Are Windows 7’s “Libraries” and How Do They Work?”